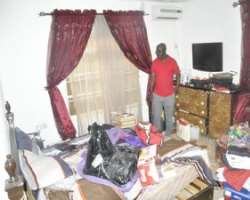 Gunmen believed to be operatives of the Department of State Security (DSS) and the Army yesterday invaded the Opobo road residence of a former federal lawmaker from Abia State, Eziuche Ubani.

The security agents, it was gathered, were in search of arms he allegedly kept in his house.

The search, according to Ubani, lasted from 1a.m till about 6a.m. However, no incriminating evidence was found.

But Ubani is accusing the All Progressives Grand Alliance (APGA) of sponsoring the unlawful invasion.

“At about 1a.m, I woke up to a noise and upon checking for the source, I saw that my house had been surrounded by armed people in both mufti and military uniforms. I was with a friend, Prince. Aware of the history of violence in Aba, we didn't open the door and so they decided to force it open but when they couldn't, they went to the boy's quarter and seized my driver. He was beaten to give information about my whereabouts but he refused.

“It was my friend who noticed their uniform when he went out and when they came in, they showed me a search warrant which originated from Umuahia.

“They said there was a petition of arms storing and training of young men to assassinate people in Aba, particularly those belonging to APGA, against me. I told them to get on with the search because I know I am innocent.

“The raid lasted until 6a.m and during the search, they kept calling their boss that they couldn't find anything. Before they finally left, they made note to say they found nothing incriminating and took nothing away.

“I know that this has to do with the inordinate ambition of Alex Otti to rule Abia by hook or crook. On Sunday, I was going to Senator Enyinnaya Abaribe's house when my phone rang. It was Ahamdi Nweke who contested the Abia Central Senatorial seat against former governor Orji. He said he learnt I held two meetings to plan his death, the last being Saturday.

“Later someone showed me a petition on facebook, sent to the Commissioner of Police and the Inspector General (IGP); it was written by Ahamdi Nweke and claiming I was plotting to kill him.

“I did not regard the matter, not until this morning when the security agencies stormed my home. I have inquired and learnt they acted without the consent of the Commissioner of Police, the Brigade (14 Brigade, Ohafia) Commander in-charge of this area.

“So, who are those people? The only time the DSS and Army will go to your house is when you have breached national security bordering on treason. I want to know what the Chief of Army Staff and their sponsors had in mind for sending them to invade my privacy in the name of searching for arms.”

When contacted, Ahamdi Nweke said he submitted his petition to the Commissioner of Police, Joshiak Habila, yesterday, after the search, stressing that the DSS and soldiers may have acted on intelligence and not his petition.

The government of Abia State has condemned the invasion of Eziuche Ubani's home, describing it as unwarranted and unacceptable.

It requested an unreserved apology from the security agencies involved, because according to it, government was embarrassed by the action.

Addressing reporters at Ubani's residence, Commissioner for Information Bonnie Iwuoha said the government demands an explanation for the invasion.

He called on sponsors of disturbances to stop forth with as government will not condone violence in any guise, stressing that security agencies are on alert to avoid such. NATION