Islamic Cleric Sentenced To Die By Hanging For Blasphemy 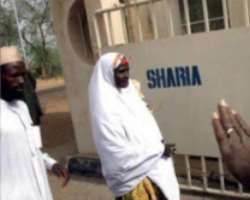 BEVERLY HILLS, January 05, (THEWILL) – Popular Islamic preacher, Abdulaziz Dauda, popularly known as Inyass, has been sentenced to death by hanging after he was convicted of blaspheming Prophet Mohammed by the Kano Higher Sharia Court on Tuesday.

The trial which was conducted behind closed doors finally ended Inyass' trial since his arrest on August 18, 2015 in Abuja but arraigned in Kano on a two-count charge of blasphemy and inciting crisis.

His woes began when hundreds of Muslim youths burnt the sharia court located at Rijiyar Lemo area of Kano in protest against the blasphemous comments allegedy made by Inyass.

Inyass, a leader of the Tijjaniyya sect reportedly committed the offence at the Maulud festivity on June 31, 2015.

Counsel to the state government, Lamido Abba Soron Dinki, said five witnesses, including the police, testified before the court but Dauda's counsel, who concealed his identity, refused to comment on the judgment.

Nine suspected accomplices were earlier sentenced to death by the same court which delayed judgement against Inyass. They all have the right to appeal against the death sentence.