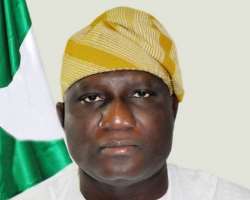 The Deputy Speaker of Federal House of Representatives, Engineer Lasun Yussuff has been described as a blessing to the people of Osun State.

Leader of the group, Comrade Dare Akinloye said, “the election of Rt. Hon Lasun Yussuff couldn’t have happened at a better time. All hands must be on deck to ensure the continuous progress of Osun State. The Deputy Speaker is committed to a prosperous Osun and has been using his good position to better the lives of the citizenry.”

He also used the occassion to pray for the good health of Hon. Yussuff and for the Almighty God to continually grant him wisdom and understanding.

The group’s Coordinator, Comrade Wale Akanji, described the vanguard an association of serious minded professionals within and outside Osun state.

Against the background of the state of the economy, he pleaded for understanding of the people, assuring that efforts were being made to remedy the situation.

Comrade Akanji also praised the decision of the Deputy Speaker to explore the use of social media as another platform for making himself accountable and accessible to the people of the country.