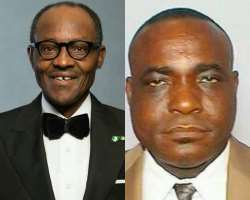 Akwa Ibom people have given the Special Assistant on National Assembly Matters (Senate) to President Buhari, Senator Ita Enang, 72-hours, to apologise to Akwa Ibom youths over statements he made against them, in a recent interview he granted Radio Nigeria, 104.5Fm, or be prepared to be dragged to court for interpretation.

Enang, a former two-term member for Itu/Ibiono Federal Constituency in the House of Representatives and immediate-past Senator, Uyo Senatorial District, was quoted to have said in the interview “They said they are training youths, giving them marks of Satan”

Continuing, he further stated “Many youths are being trained…giving them marks of Satan in different parts of their bodies…youths in Ibiono Ibom, Itu, Uyo, Etim Ekpo, Abak… have fallen victims.”

However, the declaration by the President’s aide, apart from the embarrassment and imbroglio it has brought to the Presidency, has caused serious stir, uproar and confusion in Ita Enang’s Akwa Ibom, considering the fact that the State government has within few months in office, embarked on what is being described by pundits as “top-notch empowerment programmes for the youth of Akwa Ibom”.

Investigations show that Governor Udom Emmanuel, has within few months in office facilitated special pilgrimage and empowerment training of 100 Akwa Ibom youth in Isreal for mechanised farming, trained about 329 youth on film production and another 200 youth on Power Sector as well as the training of over 1000 youth on oracle database administration, a feat that is yet to be achieved by any State governor in the country in such time frame.

Briefing newsmen in Uyo, the State capital, over the matter, the Coordinator of a Non-Governmental Organisation, Integrity Coalition, Barrister Nsikan Okon, said Enang’s statements are treasonable as they connote that the State governor is diabolic and has concluded plans to wage a war against the State, adding that the provisions of the Nigeria criminal code are very clear on acts of that nature.

The legal luminary said he hopes "Senator Enang understands the implication of his statements because nobody, irrespective of his or her political party, is above the law", pointing out that the President’s aide is gradually working himself into prison if he does not withdraw his statement within 72 hours and tender unreserved apologies to the State government and Akwa Ibom youth.

While admonishing Ita Enang to think before talking, the Integrity Coalition leader reminded him that "even past Presidents have gone to prison" and condemned the reckless and unpatriotic utterances by the man he referred to as “former Assemblyman who spent 16 years in the National Assembly without impacting positively in the life of any youth of his constituency".

Continuing, Barr Okon, hinted; “Ita Enang’s siblings and aides are still seen jumping from one tricycle to another without even a bicycle bought for them by the so-called Senator. I know those who are still begging for assistance from one politician to the other, and how can he (Enang) reconcile that with a man who has empowered thousands of Akwa Ibom youths to be self-reliance and resourceful?”, Okon asked rhetorically.

While making a passionate call on President Muhammadu Buhari, to call his aide to order, Barrister Okon, warned Ita Enang, not to take the simplicity of Governor Udom Emmanuel, for granted.

He used the forum to caution politicians in the state against making unguarded and reckless statements against the State, warning that government may not tolerate further hounding of the State Government from any quarter.