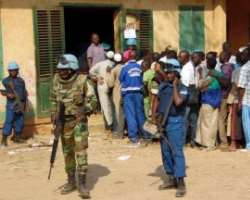 Two thirds of the 30 candidates standing for president of Central African Republic on Monday demanded the authorities halt the vote count because of what they said were irregularities in the ballot.

Many voters hope the Dec. 30 poll will restore peace after three years of conflict between Muslim rebels and Christian militias in which thousands of people have died and around 1 million have fled their homes.

The protest by the candidates could mean the final result is contested, but it may be seen by some voters as a last cry by people who see their chances of winning the election slipping away.

“The election … revealed a grave lack of organisation, multiple irregularities and intimidation in the way the vote took place that fundamentally call into question the sincerity and transparency of the election,” said candidate Theodore Kapou.

“We demand pure and simply that this set-up be stopped and we invite all relevant actors to sit round a table to figure out the best way to save the nation,” said Kapou, who spoke on behalf of the others.

The most prominent candidate at the news conference was Bilal Nzanga-Kolingba, son of a former president, who was running fourth with 50,332 behind Jean Serge Bokassa, the son of a late dictator, who had 66,229 votes, said Julius Rufin Ngouade Baba, national election authority spokesman.

Mainly Muslim rebels from a group called the Seleka seized power in the majority Christian nation in early 2013, provoking reprisals from Christian anti-balaka militias and a cycle of religious and inter-communal killings.

A U.N. peacekeeping mission and French forces are active in the impoverished country whose resources of cotton, gold, diamonds and uranium are under-exploited.