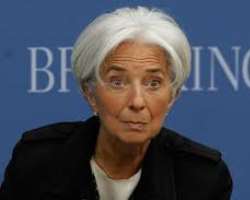 Nigerian President Muhammadu Buhari, elected on a pledge to tackle corruption, holds talks with the International Monetary Fund on Tuesday as the country seeks to spend its way out of an economic crisis fuelled by plunging oil prices.

The Fund said on Monday its managing director Christine Lagarde would meet Buhari and his Finance Minister Kemi Adeosun.

“I look forward to productive meetings … as they address important economic challenges, most importantly the impact of low oil prices,” said Lagarde in a statement.

The statement gave no other details, but the meeting suggests an acknowledgement of Buhari’s efforts to revive Africa’s largest economy.

He was elected in March after a campaign in which he promised to clamp down on the endemic corruption that has left many Nigerians mired in poverty despite the country’s enormous energy wealth.

He then announced a record budget for 2016, forecasting a doubling of the deficit to 2.2 trillion naira ($11 billion) and a tripling of capital expenditure intended to help the country adjust to the downturn in oil, which has lost around two-thirds of its value since mid-2014.

It has foreign currency reserves worth around $30 billion, and plans to borrow as much as 900 billion naira abroad to fund the deficit, which is equivalent to 2.16 percent of gross domestic product, Buhari said. Some 984 billion naira would be borrowed at home.

Nigeria relies on crude exports for more than half of state revenues and is Africa’s top oil producer.

It is also facing an insurgency by Islamist group Boko Haram, which has killed thousands and displaced more than two million people in the remote northeast and raised concern among potential investors.

Lagarde is due to arrive in Nigeria’s capital, Abuja, on Monday. She is due to give a speech to lawmakers on Wednesday and will also meet business leaders during her visit, the IMF said.

Lagarde will also visit neighbouring Cameroon, where she will meet President Paul Biya and his economic team.

The government of the central African country that exports coffee, cocoa and oil tabled a 2016 budget of 4,200 billion CFA francs ($6.9 billion) in December.

Cameroon is part of an 8,700-strong task force including troops from Chad, Niger, Nigeria and Benin that has pledged to destroy Boko Haram, which though based mainly in Nigeria has become a major threat to regional security.

Lagarde will also meet Finance Ministers from the six member countries of the Economic and Monetary Community of Central Africa (CEMAC), delivering a speech to the group on Jan. 8.

“The country (Cameroun) and the entire CEMAC region are confronted with the twin shocks of the oil-price slump and a surge in disruptions related to security,” Lagarde said.