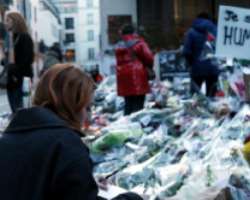 France this week commemorates the victims of last year’s Islamist militant attacks on satirical weekly Charlie Hebdo and a Jewish supermarket with eulogies, memorial plaques and another cartoon lampooning religion.

Heavy security is planned for the ceremonies honoring the 17 victims of the Jan. 7-9 gunfire sprees in Paris, which proved to be a grim forerunner of the suicide bombings and shootings in the city 10 months later in which 130 people died.

Charlie Hebdo, known for its satirical covers gleefully ridiculing political and religious leaders, lost many of its top editorial staff when two Islamist militants broke into an editorial meeting on Jan. 7 and raked it with bullets.

Another militant murdered a policewoman the next day, took hostages at the HyperCacher supermarket on Jan. 9 and killed four of them before police shot him dead. Other police cornered the escaped Charlie Hebdo gunmen in a printing plant north of Paris and killed them that same afternoon.

Charlie Hebdo plans a special edition with a cover cartoon showing an angry God with blood on his hands and a Kalashnikov automatic rifle strapped to his back. “One year later, the assassin is still on the run,” the headline says.

An editorial, released before publication on Wednesday, said the magazine would continue despite religious extremists who wanted to muzzle it. “They won’t be the ones to see Charlie die – Charlie will see them kick the bucket,” it declared.

The attacks prompted a worldwide solidarity movement, with the “Je Suis Charlie” (I am Charlie) slogan going viral on social media.

In the second wave of attacks on Nov. 13, Islamist militants mowed down people in Paris cafes and a concert hall and attacked a stadium in what was the nation’s worst post-war atrocity.

On Tuesday, President Francois Hollande is due to attend low-key ceremonies unveiling commemorative plaques at the main sites of the January attacks that will be attended by families and government officials. He will unveil another plaque in memory of the murdered policewoman on Saturday.

On Sunday, a more public ceremony is planned at Place de la Republique, the square in eastern Paris that attracted mass rallies in favor of free speech and democratic values after the attacks and became an informal memorial.

Hollande will preside over the ceremony, during which a 10-metre-high commemorative oak tree will be planted.

Johnny Hallyday, the 72-year-old French rock giant, will perform his song “A Sunday in January” about several million people who marched in protest on the streets of French cities on the Sunday following the January attacks.

Hollande is also scheduled to address members of the security forces on Thursday as part of his traditional New Year’s greetings to various groups of French society.