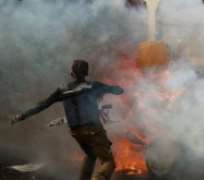 Fire has razed a major market in Yola, the capital of Adamawa State, Nigeria's north-east region.

The fire, which started between 3am to 4am, was suspected to be from an electrical fault. Situated at the heart of Yola Town, a twin city that makes up the Adamawa State capital, and a few meters from the Emirs palace.

Efforts by the State Fire Service and that of the AUN Fire Department could not save the situation as about 95% of the market had been razed down.

The incidence is sure to affect food supply in the state capital because it is a major market for grains such as rice, maize, beans, guinea corn and other food items.

An eyewitness, Usman Ajuji, told Channels Television that “the fire started about 3:30AM”, adding that “a lot of our goods were burnt and we have lost a lot.

“I have never seen this type of fire before in my life. Already we have lost out and our prayer is that God will help us all. The loss cannot be quantified. I appeal to Government to come and assist”.

Another eyewitness, who sells food in the market, said she alongside her brother lost everything in the inferno and called on the government to assist them in picking up the pieces of what is left of their lives.

The Chief Security, Yola Town Market, Alhaji Gidado, said “very earl this morning at about 3AM I was called by my officer on phone that there was a fire in the market. I quickly contacted the Fire Department and the Yola Divisional Police Officer (DPO).

“By the time we arrived, the fire had already taken over the market. When the fire service arrived, a lot of damage had been done”, he noted.

No life was lost in the fire outbreak.
This is coming barely 24 hours after a fire outbreak burnt property worth millions of Naira in the Abdulkadir Kure Market, Minna, the Niger State capital.

The incident occurred at around 1AM on Sunday morning and was blamed on the use of generators because as at the time of the incident, there was no light from the normal electricity supply channel.

Some of the affected victims in an interview with Channels Television expressed shock over the incident describing it as very unfortunate.