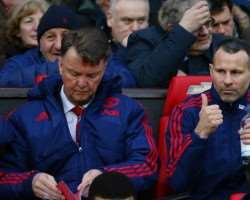 Manchester United have told manager Louis van Gaal his position is safe and there are “no plans” to sack him as they intend for Ryan Giggs to succeed the Dutchman when he is ready to take the step up.

Jonathan Northcroft  of the Sunday Times reported the owners of the Red Devils have passed on their assurances to the current boss, asexecutive vice-chairman Ed Woodward and the Glazer family want the former playing legend as the next Old Trafford coach.

The board are reportedly willing to let the opportunity of hiring Jose Mourinho slip through their fingers, sticking to the plan they formulated when Giggs was made LvG’s assistant 18 months ago.

Alex Livesey/Getty Images
The news will surely upset and antagonise a section of United fans, who believe Van Gaal and his coaching staff have taken the team as far as they can.

Mourinho would not be a stylistic step forward for United, but he is a manager with a world-class record, besides his blip at Chelsea this year after leading them to the title last season.

Giggs would undoubtedly receive the full support of the Old Trafford faithful if he lands the job, but it’s questionable he has the experience to be a success in the hot seat.

I would hope so, I think that is the right and proper succession plan for Manchester United.

Ryan was an absolutely magnificent player; he is certainly one of the best players I’ve ever worked with in the short period of time I was there. He was phenomenal, even at 39 years of age.

You would assume that would be at Manchester United; that’s what they are grooming him for and getting him ready to take over eventually when that time comes. I think that is only right and proper – he needs and deserves to have that opportunity.

Alex Livesey/Getty Images
United broke their winning duck with a victory against Swansea City on Saturday, and the last two performances under LvG have brought fresh optimism.

The team also looked more positive in their attacking ambitions against Chelsea, but the starting XI is short of genuine goalscorers.

Van Gaal’s methods have created a conservatism in United’s game, which has disappointed fans across the world.

ESPN FC’s Alex Shaw directly criticised Woodward and the Glazers for their managerial appointments of the past few seasons, after the failed tenure of David Moyes and Van Gaal’s installation:

Mourinho would crave the opportunity to manage one of the biggest clubs in the world, and elevate them back to their primary spot in European football.

Clive Rose/Getty Images
However, it seems this will not be the case as the Glazers stick to their principles, and patiently await the succession of Giggs to the helm.

Who should be the United manager next season?
Van Gaal Giggs Mourinho SUBMIT VOTE vote to see results

The Welshman will remain an icon at Old Trafford for his commitment and glory, but there is no proof he is the man to take United back to the promised land.

Mourinho is a safer bet than Giggs, but his character and individualism do not fit United’s philosophy.

If Van Gaal can stabilise results and force a top-four finish, the self-proclaimed Special One is unlikely to land at the Theatre of Dreams anytime soon.