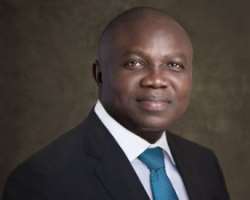 Governor Akinwunmi Ambode of Lagos State has said that the economic doom prediction for 2016 will not stop the state's economy from booming.

Governor Ambode spoke at the 2016 Annual Thanksgiving Service of the Lagos State Government, held at the State House, Ikeja, on Sunday.

The governor said despite the prediction of bleak economy for this year, Lagos is determined to forge ahead.

'We are determined to achieve inclusive progress in governance. Employment will boom, Lagos will grow in leaps and bound,' he said.

Ambode said he was very optimistic that there would be employment boom in Lagos this year, while artisans and skill vocations would thrive in Lagos.

The governor, however, thanked God for sustaining Lagos all through 2015 and for bringing him to power.

He said despite the fears that the 2015 general elections would be violent, God took control.

Ambode added that he was happy that the elections turned out to be free and fair and one that led to a change in government, in which the opposition party took over power at the center.

'The fact that we are gathered here today shows that God is with us,' he said.

The event witnessed inspirational singing from the Redeemed Christian Church of God, RCCG's choir and that of other churches.