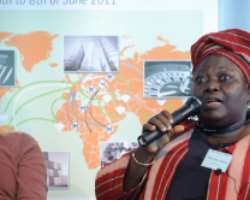 Our sister died. And we are all devastated. We called her Sista Bisi, Mama Kiitan, Olori, Chief (Mrs). To some other people, she was lawyer Bisi, or simply Bisi; at a time she was Bisi Cole, and later Mrs Bisi Olateru-Olagbegi, wife of the Olowo of Owo, HRM Fola Olateru-Olagbegi. She was a diligent, hardworking, generous, vivacious, public-spirited, passionate, committed, creative, astutely brilliant, optimistic, fashionable, and an absolutely lovely woman, who in addition to all that was gifted with an untainted love for all causes humanistic, decent and progressive. In our neighbourhood in Abeokuta, she was the first big sister to become a star, and who as she moved from one stage in her life to the other, took all of us: siblings, cousins, and family friends as her own, mentoring us as much as she could.

She used to come home on holidays from the then University of Ife, or from Lagos, at a time when we, the younger ones were still either in primary school or busy dreaming of the day when we too, would write the School Certificate Exam. We used to refer to WAEC as Baba Yaba, or the Almighty Yaba, because it was the ladder to future opportunities, and any one who had passed that hurdle as if it was so easy, was admired. She had passed the WAEC in Grade One Division, completed her HSC and earned the distinction of being the Second Best student in History in the whole of the then Western Region. By the time she was called to the Nigerian Bar in 1976, many of us were still in the primary school.

In the communities of old, successful young persons within the neighbourhood usually inspired younger ones to aspire and excel; the role models of the time were the sisters and brothers who had passed the School Certificate Examination, who had become university undergraduates or graduates and who were doing well in their chosen lines. There wasn't at the time, the kind of tragedy that has befallen Nigeria these days where society's new role models are persons who drive flashy cars, wear slutty clothes and flaunt hideous wealth. Sista Bisi was a role model of the old tradition, she knew all of us in that extended family fold and throughout her lifetime, she encouraged us all, and further extended that love to our children and wives. She was never tired of connecting with people.

She was simply what you will call, a people's person, a networker, a communicator, a humanist. She went to law school, got married shortly thereafter to a lecturer at the Nigerian Law School, who would later become the Olowo of Owo. Marriage and career didn't take her away from family. When she and her husband lived in Alagbon Towers, 2nd Avenue, in Ikoyi, Lagos, we all used to troop in and out of her home, there was an unending flow of traffic from Abeokuta, and at least four of her Adeogun siblings: Kunle, Yemi, Ope and Tunji, more or less became permanent members of her own immediate family.

It is a tribute to her capacity to manage relationships how she coped with the constant pressure for her attention from all her quarters. Then the children came: Kiitan, Bamarajo, Olasimbo and Olafusi. She was a devoted mother; she loved to succeed in everything she touched, and in particular, she loved children to a distraction but she was strict and firm. She brought the children to Abeokuta as often as she could, she wanted them to be properly grounded, and as they grew older, she never failed to remind them of their family heritage.

She came from illustrious Egba and Lagos backgrounds, married into Owo royalty, and became the mother of princes and princesses. She took that legacy very seriously. On many occasions, she would emphasize how the Olateru-Olagbegi family of Owo, apart from being royalty, is one of the largest and most educated families in Yoruba land, and that any Olateru-Olagbegi child has a duty and an obligation to excel and live a life of dignity. For her, a good name is the most valuable asset. She therefore devoted her time and energy to making sure her children got it right, which is why it is so painful that just as the children are settling down to their own lives, and charting their own path and making her proud, and just as the grandchildren were beginning to arrive, and she herself was beginning to settle down to that phase of life, that enemy of life, that cruel grim reaper, that cause of agony in many Nigerian families called CANCER crept in and gradually took our sister away. God will punish cancer!

Sista Bisi was not just good at home; she was a true citizen and a humanist. Her great impact was felt not just in the goodness that she spread within the private domain, but in the public arena where she was influential as an activist for progressive causes. A lawyer, she regarded the law as an instrument for ensuring social justice, human rights and development, and hence for more than 30 years, she was engaged not just as a legal practitioner and notary public but as a leading advocate for the rights of women, equity, non-violence, children's rights.

She campaigned vigorously against illegal migration, human trafficking, child abuse, and domestic violence and with the same passion, for the political rights of women, gender equity, the rights of the girl child, gender empowerment and human rights. Under the auspices of the Women's Consortium of Nigeria (WOCON), a Non-Governmental Organization with UN Special Consultative Status which she co-founded in 1995, she organized trainings for other advocates, facilitated workshops, wrote and presented papers at local and international conferences and became over the decades, a major voice on key issues of development and social progress and a mentor to a generation of younger women who looked up to her.

She wrote prolifically and with great insights on the issues that engaged her attention, and it is well that she has left behind as part of her legacy, a book titled Path to Women's Development: Thoughts, Vision and Passion (Lagos: WOCON, 2013). The book offers a strong and impressive portrait of her concerns as well as her many convictions. She was for more than 30 years actively involved in many of the activities for centering women's role in the development process in Nigeria, and for ensuring national good, her most recent national assignment being her membership of the National Conference in Abuja, in 2014. Even while on her death bed, she remained engaged, indeed the morning she died, on December 17, 2015, WOCON had a programme on Human Trafficking in Badagry where she had been scheduled months earlier to give a keynote address. She sent a representative to deliver the address, and although she died on the opening day of the workshop: the EU/UNODC Campaign Programme Against Human Trafficking and Smuggling of Migrants, her wish was dutifully carried out as she would have wanted.

Her friends and colleagues would readily attest to the fact that she was a polymath; she was involved in so many causes all at once, managing her time and energy carefully to be able to multi-task productively, demonstrating passion, intellect and courage. Some of these include her stint as Publicity Secretary and Chair, Public Relations Committee of the International Federation of Women Lawyers (FIDA), Nigeria (1986-1990), President FIDA, Nigeria (1993 -1994), President, Eko Lioness Club (1990-91), Secretary, Law and Status Committee of the National Council of Women's Societies (1988-1992), Member, Women's Caucus for Gender Justice in the Establishment of the International Criminal Court (1998); National Co-ordinator and Board Member, Women in Law and Development in Africa (WILDAF), Vice-Chair/South-West Coordinator, Transition Monitoring Group (2001-2004), Board Member, Advocacy Project of USA (2003-2015), Founder and Co-ordinator, National Coalition Against Trafficking in Persons (2000-2015).

A Christian, she was also very active in the Lord's vineyard, giving of her time and resources to support the work of God. She was a Trustee and former President of the Busy Bees Society at the African Church Cathedral Bethel, Lagos, where she worshipped. She was also Matron of the Young Women Christian Association (YWCA) Society of St. Jude's Anglican Church, Oke Ijeun, Abeokuta and Legal Adviser, African Church, Iworo, Badagry. She loved singing and dancing, and was always ready with a humorous remark to brighten up the room and put people in a good mood. So versatile was she that she even got involved with Karate and served as the First Executive Chairperson of the Karate Association of Nigeria (1986 -1990).

She dressed simply, her favorite choice being local fabrics, and particularly Aso Oke, to promote indigenous culture. She avoided ostentation, lived in a modest house at Dolphin Estate in Ikoyi, Lagos and was contented with her life. She will be remembered for her contributions to the women's movement in Nigeria, and her principled advocacy for the empowerment of women and the girl-child, the promotion of constitutionalism, human rights and social justice, and her defence of citizen rights. She belonged to a generation of Nigerian women who used their time, professionalism and talents to serve the higher cause of moving society forward, and who are admired not for being female, but for being human and progressive.

There is an established tradition in this regard, dating back to a long time in the past, from the days of the likes of Mrs Funmilayo Ransome-Kuti, strong amazons who added value to the Nigerian story and collective experience, without seeking reward or personal glory. Today, there are so many young women following in the same footsteps. Bisi Olateru-Olagbegi has played her part, someone out there will pick up the baton she has dropped, and we are consoled that the struggle for equity will always continue as the search for social justice remains an unending global challenge.

In her case, she was a lawyer who got involved; her expectation is that more female lawyers will also see the umbilical link between law and social change. Here are a few words of her own, defining a societal role for female lawyers: “…the female lawyer occupies a unique position in the society”, she writes. “By virtue of her education, she is relied upon by other women, for the advocacy, and enforcement of their rights. With good use of her expertise as a lawyer, she is in a position to effect positive change not only for women and children but the society at large in the efforts to promote equality, development and peace. If female lawyers in Nigeria play their role, I believe, we will in the next millennium witness a society where peace and justice reign.”

That of course was her vision and her mission, the compass for her commitment. Cancer, be not proud! Olabisi Ibijoke Olateru-Olagbegi (nee Cole) lived a life of meaning, purpose and impact. As she joins the Saints triumphant on Friday, January 29, all we have to say is: Thank You, Lord. Sista Bisi. Goodnight. Goodbye.