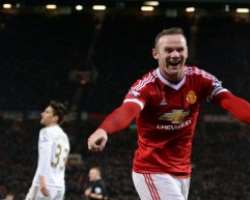 But even more significantly the England forward’s first league goal since October gave United their first win in nine matches and moved them up to fifth place.

It was a badly needed three points for United manager van Gaal, who had been forced to deny he was considering quitting over Christmas.

Four defeats and two draws in December had contributed to a barren run which had seen United go out of the Champions League and slip out of the Premier League’s top four during the club’s worst run since 1990.

They could ill-afford another setback and Anthony Martial headed United in front as they scored only their 11th goal in 15 games. United’s goal and points tally had been their lowest ever in the first half of a Premier League season and when Gylfi Sigurdsson headed Swansea level with 20 minutes to go another winless afternoon threatened.

But van Gaal’s men managed to find the route to goal once more thanks to Rooney’s third league goal of the season as relief flooded around Old Trafford.

As they had done against Chelsea in their previous home stalemate, United tried to show more attacking intent from the start with van Gaal employing a three-man defence and Ashley Young and Anthony Martial as wing-backs in a bid to set up a first home win since November.

Young helped provided an attacking threat but with only one out-and-out striker in Rooney, United still found genuine chances hard to come by before half-time.

Morgan Schneiderlin made a rare foray forward inside the first minute to get in a shot which was blocked by Federico Fernandez, but it was another 20 minutes before United had another sight of goal as Rooney fired into the side-netting. - Frustration -
Having kept the home side at bay, Swansea winger Wayne Routledge tested David de Gea with a volley and frustration began to grow around Old Trafford.

But two minutes into the second half United finally went in front to change the context of the afternoon.

Again Young was involved in a telling capacity as his cross was perfectly delivered for Martial, who had drifted into a more central position, to score with a powerful downward header from eight yards which bounced up and past Lukasz Fabianski to give the young Frenchman his eighth goal of the season.

With nothing to lose, Swansea began to impose themselves.

Andre Ayew’s header against a post from Sigurdsson’s cross raised the anxiety levels and with 20 minutes to go United were pegged back.

Substitute Modou Barrow gave Swansea an extra cutting edge and, from his cross, Sigurdsson glanced home the equaliser with a header which looped beyond David de Gea.

Suddenly United were back to square one but just when they needed him Rooney delivered.

When Martial beat Angel Rangel and drove the ball low across the six-yard box, Rooney flicked the ball home with the inside of his foot to claim one of the more important goals of his long United career.

United still had 12 minutes and four of stoppage time to hold out, but with de Gea making a fine save from Ashley Williams and goalkeeper Fabianski coming up from a corner to head just wide with the final touch of the match, van Gaal was at last able to celebrate a win.