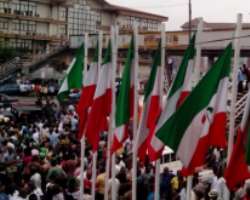 BEVERLY HILLS, January 02, (THEWILL) –  The Peoples Democratic Party, PDP, has accused President Muhammadu Buhari and leaders of the governing All Progressives Congress, APC, of having a strong aversion to constructive criticisms, after it had gleefully rained invectives on former President Goodluck Jonathan under the guise of opposition politics.

PDP, in a statement issued on Saturday by its National Publicity Secretary, Chief Olisa Metuh, reminded the APC that it wrongly depicted the immediate past president as 'clueless and incompetent'.

While describing itself as the most decent, mature and constructive opposition party in the history of the nation’s democracy, the opposition party claimed that it has continued to portray this attribute by showing enormous respect for the person and exalted office of President Muhammadu Buhari.

The statement reads in part, “During the Goodluck Jonathan presidency, Mallam Nasir el-Rufai, while in the saddle as interim Deputy National Secretary of the APC, in a post on his twitter page, described President Jonathan as 'lazy, docile, incompetent, clueless, hopeless and useless leader.' Other APC leaders made raining abuses on Jonathan a past time.

“The PDP is a very responsible opposition party; our leaders are mature; and we have demonstrated so in our critique of the President's responses during the maiden Presidential Media Chat. We have reviewed President Buhari's performance and concluded that it was uninspiring.

“The entire world listened to President Buhari during the chat and went away with different impressions. We did and came up with the theme of our initial reaction that portrayed him very appropriately as a tyrant,” the party stated.