Buhari is not God, we will not worship him – PDP replies APC 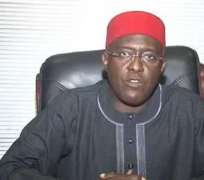 The Peoples Democratic Party (PDP) has sympathised with President Muhammadu Buhari and leaders of the All Progressives Congress (APC) over their inability to accept, with equanimity, constructive criticisms of their administration.

In a statement on Saturday, the PDP National Publicity Secretary, Chief Olisa Metuh, said it was unfortunate that the APC and its leaders, who gleefully and unjustifiably poured invectives on former President Goodluck Jonathan in the guise of playing the role of an opposition party, would now not want to condone criticisms.

'Unlike the APC that denigrated the office and person of former President Jonathan by wrongly depicting him as 'clueless and incompetent', the PDP remains the most decent, mature and constructive opposition party in our democracy and we have evidenced great respect for the person and exalted office of President Muhammadu Buhari.

'During the Goodluck Jonathan presidency, Mallam Nasir el-Rufai, while in the saddle as interim Deputy National Secretary of the APC, in a post on his twitter page, described President Jonathan as 'lazy, docile, incompetent, clueless, hopeless and useless leader.' Other APC leaders made raining abuses on Jonathan a past time.

'The PDP is a very responsible opposition party; our leaders are mature; and we have demonstrated so in our critique of the President's responses during the maiden Presidential Media Chat. We have reviewed President Buhari's performance and concluded that it was uninspiring

'The entire world listened to President Buhari during the chat and went away with different impressions. We did and came up with the theme of our initial reaction that portrayed him very appropriately as a tyrant. And for purpose of clarity, a tyrant is a ruler who has complete power over a country and who uses the power in a cruel and unfair way, which was why we recommended the suspension of the operation of the constitution so he can rule for the next four years as a maximum ruler.

ï¿¼'In its reaction, his party National Chairman, John Oyegun magisterially and dictatorially warned that 'we (APC) may not condone such anymore.' Our position in the PDP is that we are in trouble as a nation. All we hear from the APC regarding our freedom is 'we won't tolerate', 'we won't condone.' Are these words used by democrats or tyrants?

'So, the PDP too is being warned and coerced on what to say as opposition party. The PDP must be commended for the civil, responsible, mature, issue-based opposition it has played. The nation knows how the APC rained insults on former President Jonathan and that the PDP, during that time, never used words like 'it would not condone…'

'Some have even criticised the PDP style of opposition as being too civil considering the tyranny we are facing. That is why Chief John Oyegun could term a dictionary word-'tyrant'- as insulting. Nigerians do not need the PDP or anyone else to make them decide if President Buhari's APC government fits the definition of a tyrant.

'The real trait of the President was unraveled during the media chat. He has repeatedly shown his scorn for the Legislature, an independent arm of government while sanctioning security agencies' disrespect for court orders and the impunity of continuous incarceration of people who have been granted bails by the courts.

'Also from his responses, the President has even pronounced a guilty verdict on Col Sambo Dasuki and Nnamdi Kanu of Radio Biafra even before the hearings by the courts. Sadly, even the international community has noted this brazen scorn and disdain for the independence of the judiciary.

'Furthermore, how do we describe a President who openly denigrated an entire race as he did in the media chat when he suggested that the Igbos were insatiable with the appointments his government has so far given to them? Indeed, the timing and the tenor of the President's comment, given the security and political situation in the land, remain worrisome, especially at a time a nerve-soothing statement from the father of the nation could have reassured the agitators of the need for peace and unity in the nation.

'Besides, it is sad and embarrassing that President Buhari's anti-corruption crusade has now been reduced to a war between the APC and the PDP as declared by the Office of his spokespersons. Since they have confirmed that this is what the anti-corruption crusade is all about, the APC is obviously seeking to destroy the PDP so that it can push through Buhari's second tenure in 2019 without opposition from the PDP.

'This has also confirmed our concern that this is the reason the Federal Government is persecuting, and not prosecuting, Col. Sambo Dasuki. The APC and its leaders fear that Dasuki, given his vast political and security network, may be harbouring a presidential ambition, more so that the PDP has zoned its presidential ticket to the north.

'The PDP is conversant with the sinister plan by the APC-led Federal Government to completely decimate our party by raking up all manner of allegations of corruption against the Goodluck Jonathan administration and leaders of the PDP with a view to taking them to court on orchestrated charges.

'Finally we are aware that President Buhari has directed security agencies to be more vicious in dealing with our members and has continued to subtly coerce the Judiciary to convict those being charged to court. But what gives us joy is that President Buhari is not God and we will not worship him.