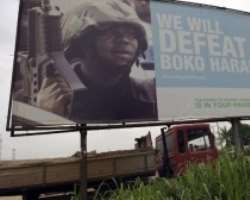 A campaign signboard displayed by the ruling All Progressives Congress in Ogun State, southwest Nigeria.

Ryan Cummings is the chief security analyst for sub-Saharan Africa at red24 , a crisis management consultancy, and also a founding member of the Nigeria Security Network , a non-profit think tank. Follow him on Twitter @Pol_Sec_Analyst . The opinions expressed in this commentary are solely those of the author.

(CNN) “And I assure you that we will defeat Boko Haram by the end of this year.” This was the pledge made by Nigerian President Muhammdu Buhari to his Beninese counterpart, Boni Yayi, during a gala dinner commemorating Benin’s independence during the summer of 2015.

It was a promise that the Nigerian head of state would also reiterate to fellow Nigerians, who eagerly waited for him to make good on his promise and act with the decisiveness that Buhari had accused his predecessor, Goodluck Jonathan, of lacking. Yet as 2015 drew to a close, the specter of Boko Haram loomed as large as ever over Africa’s most populous state.

Indeed, less than 48 hours after the Buhari regime announced that it had fulfilled its vow of defeating the group, at least 50 people were killed in a wave of violence in Nigeria’s insurgent-embattled Borno and Adamawa states. Those skeptical of Boko Haram’s defeat were vindicated, those residing within the terrorists’ deadly reach continue to live in fear.

Nigeria’s information minister, however, downplayed the December 27 attacks and further reaffirmed that Boko Haram was on the precipice of being “wiped out.” Lai Mohammed claimed to local media that all insurgent-held territory had been reclaimed and that Boko Haram no longer possessed the operational capabilities to achieve its raison d’etre, the creation of a “dawlah” — or Islamic-state — in north-eastern Nigeria.

The problem with Mohammed’s “impending demise” narrative is that it equated loss of territory with defeat. Prior to Boko Haram’s capture in July 2014 of Damboa, the first Nigerian town to fall to the extremist sect, its near decade-long insurgency had been characterized by traditional guerilla warfare. The group’s favoured modus operandi had been suicide bombings and hit-and-run raids, not the capture and control of territory.

The acts of violence which the Nigerian government has derided as indicative of Boko Haram’s weaknesses are actually the very mechanisms which have made it one of the — if not the — deadliest terrorist organizations in the world .

Apart from being face-saving exercises, accounts of Boko Haram’s imminent destruction may also be an attempt by the Buhari regime to misdirect attention from the myriad issues which have — and continue to — hamper its counter-insurgency strategy.

The foremost of these is the failure of Nigeria and her Lake Chad neighbors to formulate a regionally coordinated response to the insurgency. Although it originated as a grassroots Nigerian organization, Boko Haram’s ambitions and operations have become transnational as it increasingly exported its insurgency across the border to Cameroon, Chad and Nige

While these countries agreed to form a joint anti-Boko Haram task force in 2014, rumors of strained diplomatic tensions, disagreements over the direction of operations and a lack of financing have all seen the unit miss several deployment deadlines .

Despite an intensification in anti-terrorism initiatives by the Nigerian military, the failure by neighboring countries to respond in kind has afforded Boko Haram space in which to regroup, recruit and re-energize its armed uprising against the Nigerian state.

Alleged maladministration within the Nigerian military is another issue diluting the efficacy of the country’s counter-terrorism response. In June 2015, Amnesty International released a damning report detailing alleged war crimes committed by the Nigerian military in its counter-insurgency initiatives. These included arbitrary arrests, enforced disappearances, torture and the extrajudicial killings of thousands of Boko Haram suspects, according to the Amnesty report.

Although both the Nigerian presidency and military leadership promised to investigate these claims , it remains unclear as to whether an steps have been made toward the inquiry.

If the clams are true, then such actions may see the army not only lose the hearts and minds of local communities, which are essential to any successful counter-insurgency cooperation, but also aid Boko Haram in its radicalization and recruitment process. #BringBackOurGirls: 500 days later 01:46
The arrest of a former National Security Adviser has also highlighted how corruption has allegedly influenced Nigeria’s response to Boko Haram. Sambo Dasuki has been charged with embezzling military funds earmarked for the fight against Boko Haram at a time when Nigerian soldiers complained about lack of ammunition, fuel and even food while deployed in the field of battle . Dasuki has denied the corruption charges. He remains in custody.

Although the arrest of Dasuki and others demonstrates Buhari’s commitment to fighting alleged corruption, its systemic presence in Nigeria suggests that possible malfeasance within the defense sector is unlikely to be remedied overnight. Transparency International, which monitors corruption round the world, reported in 2014 that Nigeria scored only 27 out of 100 on the corruption perception index. Buhari has made fighting Nigeria’s official corruption a key part of his presidency since he came to power in 2015 .

A final consideration is the impact that Boko Haram’s pledge of allegiance to Islamic State in March has had on the African group’s longevity . While the Nigerian government denounced the oath of fidelity as being nothing more than superficial propaganda, the fact is we know little about the ISIS model for expansion — and even less about Boko Haram’s inner-workings — to know definitively the implications of the pledge.

What we do know is that Boko Haram has become the largest ISIS affiliate anywhere and has increased its jihadist credentials within an area of sub-Saharan Africa where the prevailing social, political and economic climate is seen as conducive to radicalization .

The inconvenient truth is that Nigeria has not defeated Boko Haram but simply reversed the gains that the terror group has scored against it. While territory has been recaptured from rebel hands, innocent lives have, and continue, to be taken by it.

No victory can be declared in this war until the day that the Nigerian government can secure both land and human life from Boko Haram’s deadly reach. Despite claims to the contrary, it is a day which will now have to be ushered in with the dawn of a new year.

Ryan Cummings is the chief security analyst for sub-Saharan Africa at red24 , a crisis management consultancy, and also a founding member of the Nigeria Security Network , a non-profit think tank. Follow him on Twitter @Pol_Sec_Analyst . The opinions expressed in this commentary are solely those of the author.