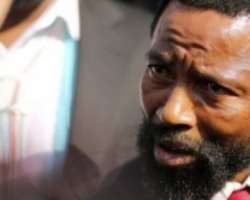 A South African king who is a nephew of the late Nelson Mandela has begun a 12-year prison sentence for kidnapping, assault and arson.

King Buyelekhaya Dalindyebo reported to prison after his legal attempts to overturn his conviction failed.

The case against King Dalindyebo was related to a dispute he had with some of his subjects about two decades ago.

He comes from the Thembu clan, to which Mr Mandela, South Africa’s first black president, belonged.

He is the first monarch to be jailed in South Africa since minority rule ended in 1994.

They play a largely ceremonial role, and attend to minor disputes within their communities.

King Dalindyebo was accused of kidnapping a woman and her six children, setting their home on fire and beating up four youths, one of whom died, because one of their relatives had failed to present himself before the king’s traditional court.

He handed himself to prison authorities in the eastern city of Mthatha in compliance with a court order after a judge refused to extend his bail on Wednesday, the justice ministry said in a statement.

Earlier, Justice Minister Michael Masutha turned down his request for a retrial, saying there was no legal justification for doing so.

King Dalindyebo had maintained his innocence, saying he disciplined his subjects under customary law.

Analysis: Milton Nkosi, BBC Africa, Johannesburg
Many of the king’s subjects feel that he has sullied the reputation of the Thembu royal household.

His father, Sabata, was a revered monarch who fought against minority rule, and campaigned for the unity of South Africa’s ethnic groups.

In contrast, his son turned out to be a disgrace, and has paid the ultimate price.

More significantly, South Africa has once again demonstrated that, despite its leadership problems, it upholds the rule of law, even if it means locking up a king and alienating some of his subjects ahead of crucial local elections next year.

It is also to the monarch’s credit that after exhausting all his legal options, he reported to prison rather than daring the police to come and arrest him at his palace in South Africa’s Eastern Cape province.

Sentencing the king in October, the Supreme Court of Appeal said: “His behaviour was all the more deplorable because the victims of his reign of terror were the vulnerable rural poor, who were dependent upon him. Our constitution does not countenance such behaviour.

“We are a constitutional democracy in which everyone is accountable and where the most vulnerable are entitled to protection.”

There are conflicting reports on whether King Dalindyebo would remain the monarch of the Thembu people.

One royal family spokesman was quoted in the South African media as saying that its elders would meet on Monday to choose a successor, while another spokesman said that he would remain the king despite his imprisonment.

The DA revoked his membership following the ruling of the Supreme Court of Appeal.