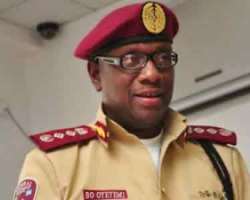 The FRSC has elevated 607 officers to between the ranks of Deputy Chief Marshals and Road Marshal Assistant II as a follow up to the recent promotion exercise.

A statement issued on Thursday in Abuja by the commission's Head of Media Relations and Strategy, Mr Bisi Kazeem, said the promotion was a follow up to the recent one involving 442 officers on Inspector cadre.

“The management has promoted additional 607 Road Marshals to their next ranks in the service.

It said that the Corps Marshal, Mr Boboye Oyeyemi, urged the marshals and other recently promoted personnel to handle the responsibilities that had come with their new ranks effectively.

The statement also charged every personnel of the commission to key into the vision of the corps marshal, adding that this was to reduce road crashes in the country to zero per cent.

It also said that Oyeyemi on Thursday embarked on another aerial surveillance on the Enugu-Onitsha corridor to ensure hitch-free movement during the New Year celebration.

The corps marshal, according to the statement, called on road users to be law abiding on the roads.

Oyeyemi had flagged off the 2015 aerial surveillance on Dec. 24 in Abuja, covering Abuja-Lokoja and Okene-Ibilo axis.