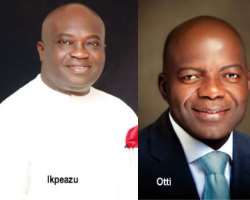 The Court of Appeal sitting in Owerri has sacked Dr. Okezie Ikpeazu of the Peoples Democratic Party as governor of Abia State and declared Alex Otti of the All Progressives Grand Alliance as the governor of the state.

The court directed the Independent National Electoral Commission to make arrangements for Otti's swearing in.

The Abia State Governorship Election Petition Tribunal had in November dismissed the petition filed by Otti challenging the election of Dr. Okezie Ikpeazu as governor of the state.

Otti had sought the nullification of the election on the grounds that it was marred by malpractice and irregularities, but the tribunal held that his petition lacked merit.

Unsatisfied with the judgment Otti, who resigned as the Managing Director of Diamond Bank in 2014 to pursue his political ambition, took his case to the court of appeal.

Click here for details
Ikpeazu has reportedly said he would challenge the decision at the Supreme Court.