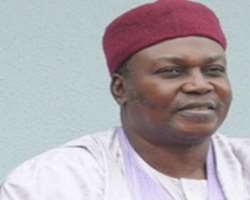 The Abuja Division of the Court of Appeal, yesterday, reversed the verdict of the Taraba State Governorship Election Petition Tribunal which nullified the election victory of Governor Darius Ishaku of the Peoples Democratic Party, PDP.

In a unanimous judgment  yesterday, a five-man panel of Justices of the appellate court, held that Ishaku validly won the April 11 governorship election in the state.

The appellate court maintained that the Justice Musa Danladi Abubakar-led tribunal, 'grossly misdirected itself', when it not only nullified governor Ishaku's election, but went ahead to declare the candidate of the All Progressives Congress, APC, Senator Aisha Jumai Alhassan, winner.

Justice Abdul Aboki, who read the lead judgment yesterday, said the tribunal acted outside its jurisdiction when it invalidated Ishaku's election on the premise that he was not validly nominated by the PDP.

The appellate court stressed that the issue of nomination of a candidate by a political party 'is clearly a pre-election matter which no tribunal has the jurisdiction to entertain'.

According to the court, neither the APC nor its candidate, Alhassan, had the requisite locus-standi to query the outcome of the PDP governorship primary election that produced Ishaku.

It emphasised that under section 87(9) of the Electoral Act, only those that participated in the said PDP primary election, has the statutory right to challenge its outcome at the Federal High Court or State High Court.

The appellate court said contention on  whether the PDP rightly or wrongly conducted its governorship primary election, did not fall within matters that could be entertained by an election petition tribunal.

'The most important question to be asked here is, was the appellant a member of a political party or sponsored by a party to participate at the election?

'All evidence before the tribunal pointed to the fact that the appellant was duly sponsored by the PDP and INEC duly received his nomination. INEC did not at any time queried his eligibility to participate in the election.

'Both oral and documentary evidence before the tribunal clearly showed that the appellate was a member of the PDP and was validly sponsored.

Meantime, lead counsel to the APC, Mr. Mahmud Magaji, SAN,  yesterday, said his clients would contest the judgment at the Supreme Court.

It will be recalled that the Justice Abubakar led Tribunal had on November 7, declared Senator Alhassan  of the  APC as the bona-fide winner of the April 11 governorship poll in the state.

The three-man panel tribunal which conducted its sitting in Abuja, said it was satisfied that governor Ishaku was not validly nominated by the PDP to contest the election.

The tribunal said there was overwhelming evidence that the PDP in Taraba State, sidelined the provisions of the Electoral Act 2010, and the 1999  constitution, as amended, when it decided to hold the primaries that produced Ishaku as its candidate in Abuja instead of Jaligo the Taraba State capital.

It held that the purported nomination of Ishaku for the election, without a valid primary election monitored by INEC, was in breach of sections 85, 87 and 138(1) of the Electoral Act, 2010, as well as section 177 of the 1999 constitution, as amended.

The tribunal stressed that the governorship primary election PDP held at its National Headquarters in Abuja on December 11, 2014, was not known to the law and was therefore invalid

It held that PDP failed to give cogent and verifiable reason why it decided to hold the said primary election in Abuja without the consent of  INEC.'I hold that the 1st and 2nd respondents have no right to challenge the primary election at which the appellant emerged as none of them is a member of the PDP.