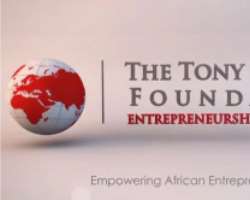 SAN FRANCISCO, December 31, (THEWILL) – Budding entrepreneurs across Africa can now apply to join the second annual Tony Elumelu Entrepreneurship Programme (TEEP) for start-up businesses based in Africa as the TEEP application portal opens for entries on Friday, January 1, 2016 and will accept applications until Midnight (WAT) on March 1, 2016.

To apply, entrepreneurs must complete the online application form on the web portal , a statement issued on Thursday said.

According to the statement, successful applicants who complete the programme will receive the local currency equivalent of N850,000 as non-returnable seed capital, and are eligible for a further N850,000 in the form of either debt or equity, depending on business need and other criteria.

Selected entrepreneurs, the statement added, will join the existing cohort of 1,000 Tony Elumelu Entrepreneurs, from 51 countries, who formed the inaugural 2015 cycle of the programme and have thus far, received considerable benefits from their participation, including 12 weeks of training on how to set up and manage businesses with mentoring and financial support offered by The Tony Elumelu Foundation; Over 90 percent of Tony Elumelu entrepreneurs, with existing businesses, have reported increased growth in the past year.

Other benefits include access to further funding as a significant portion of the entrepreneurs have accessed additional external funding through the platform provided by Tony Elumelu Foundation; and networking opportunities as a flourishing alumni network has developed, providing personal linkages and business opportunities across the continent.

Speaking on the programme, founder, serial entrepreneur and philanthropist , Tony O. Elumelu, said: “I believe in empowerment that can change the face of Africa as we know it. African entrepreneurs are our future leaders and I am passionate about giving them the opportunity to succeed.

“The Tony Elumelu Entrepreneurship Programme is a major, deliberate effort on my part, to institutionalise luck and provide seed capital funding, mentoring, business training, pan-African networking and springboard that our aspiring entrepreneurs need to leap from.”

Also speaking on the programme, CEO of the Tony Elumelu Foundation, Parminder Vir (OBE), made a call for an even broader participation in TEEP this year, saying, “We encourage women and men with business ideas from all sectors, from every region, city, town and village across Africa, to apply. This is your programme and if you can demonstrate your passion and commitment, then this wonderful opportunity to become a Tony Elumelu Entrepreneur could be yours for the taking.”

The Tony Elumelu Entrepreneurship Programme is open to citizens and legal residents of all 54 African countries. Applications for 2016 can be made by any for-profit business based in Africa, including new business ideas which have been in existence for less than three years.