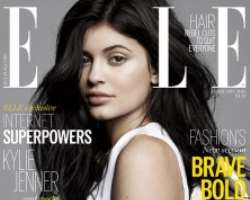 SAN FRANCISCO, December 31, (THEWILL) – The youngest Jenner/Kardashian, Kylie is the cover star for the February '16 edition of ELLE magazine.

For the editorial, the 18-year old who has been named on of Time magazine's most influential teens in 2015 with a total of 71 million online followers (and counting), and an estimated net worth of £3.2 million, gets candid about her upbringing.

The reality star/teenage entrepreneur, in her chat opens up about growing up as part of the most famous family in the world, how Justin Bieber helped her deal with trolls, her relationship with dad Caitlyn, and her plans to give up fame entirely.

We wonder what 'momager, Kris will have to say about that!

As part of the 90s inspired fashion shoot, ELLE brings Kylie Jenner together with male model of the moment and GQ magazine's contender for 'Most Stylish Man Of 2015', Lucky Blue Smith, presenting them like you've never seen them before.

Check out more photos from the shoot below! In a short clip, Kylie also shares which she and Lucky would be if the were emojis.