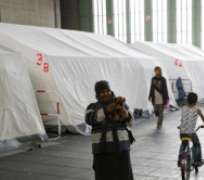 Germany will start holding personal hearings for asylum seekers from Syria as of Friday, an Interior Ministry spokeswoman told Reuters on Thursday, reversing a policy of granting almost automatic refugee status for Syrians.

Syrians have since the end of 2014 enjoyed a simplified asylum process, which has exempted them from personal hearings. Critics say this has allowed Islamic State to smuggle in militants to carry out attacks in Europe.

Chancellor Angela Merkel has repeatedly rebuffed pressure to clamp down on migrant arrivals along German borders, saying Germany has a duty to shelter people fleeing conflict and persecution.

But opposition to her stance grew at home and abroad after two of the suicide bombers in the Nov. 13 Paris attacks were found to have been carrying fake Syrian passports.

“This regulation will be valid as of January 1 regardless of the country of origin,” the Interior Ministry spokeswoman said of the change in policy, confirming a report in best-selling Bild newspaper.

France this week asked the European Union to improve the detection of fake Syrian passports used by people trying to get into Europe.

French Interior Minister Bernard Cazeneuve called on the European Commission to tighten security by improving the quality of equipment used to check travel documents at external borders, notably in Greece and Italy.

Blank passports were in circulation that had been stolen from administrative facilities in places run by Islamic State, and once an identity had been added to them they were very hard to detect, he wrote in a letter.

Two of the suicide bombers who detonated explosives outside the Stade de France stadium, as part of the November attacks which killed 130 people, were carrying false Syrian passports they had shown in Greece when entering the EU on Oct. 3, Cazeneuve said.

Germany has taken in just over a million migrants this year, far more than any other European country.