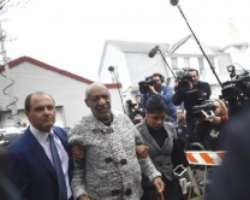 Bill Cosby was charged on Wednesday with sexually assaulting a woman after plying her with drugs and alcohol in 2004, the only criminal case against a once-beloved entertainer whose father-figure persona has been marred by dozens of similar misconduct accusations.

A frail-looking Cosby, 78, walking with a cane and accompanied by two lawyers, appeared for his arraignment hours later at a courthouse just outside Philadelphia, where he posted a $1 million bond, turned over his passport and was ordered to avoid any contact with his accuser.

Smiling and politely thanking District Court Judge Elizabeth McHugh at the end of the brief proceeding, Cosby left the Elkins Park courthouse and was driven to a nearby police precinct to be finger-printed and booked.

He emerged from the police station 10 minutes later and was whisked away in the same black sport utility vehicle that had delivered him to the courthouse. He made no statements as a throng of reporters shouted questions at him.

He is due to return to court on Jan. 14 for a preliminary hearing.

The case against Cosby was filed just before the statute of limitations deadline for criminal prosecution was due to lapse in January. The charge stems from allegations leveled by Andrea Constand, 44, who settled a civil case against Cosby for an undisclosed sum in 2006.

“Today, after examination of all the evidence, we are able to seek justice on behalf of the victim,” Kevin Steele, the newly elected district attorney for Montgomery County, told an earlier news conference. Steele made a campaign issue of his intent to prosecute Cosby.

Constand, a former basketball team manager at Temple University in Philadelphia, Cosby’s alma mater, is one of more than 50 women who have publicly accused the star of sexually assaulting them in incidents dating back decades.

Cosby did not enter a plea in Wednesday’s case. But he and his lawyers, while acknowledging marital infidelity on his part, have consistently denied any allegations of sexual misconduct.

His legal team issued a statement late on Wednesday calling the sexual assault charge “unjustified,” suggesting it was politically motivated and declaring Cosby “will be exonerated by a court of law.”

The prosecution came as no surprise, his attorneys said, given that it followed a “hotly contested” election for district attorney in which “this case was made the focal point.”

Cosby, who personified the model American family man in his long-running hit television show, was charged with aggravated indecent assault, a second-degree felony carrying a maximum penalty of 5 to 10 years in prison and a $25,000 fine.

‘VICTIM DID NOT CONSENT’
According to an affidavit accompanying the charge, the victim was a guest at Cosby’s home in Cheltenham near Philadelphia one evening in January 2004, when he gave her wine and urged her to take three blue pills, prosecutors said in a statement.

“Shortly thereafter, the victim became incapacitated, and Cosby led her to a couch. The victim lay down … and Cosby positioned himself behind her. Cosby then fondled the victim’s breasts, put his hands inside her pants, and penetrated her vagina with his fingers,” prosecutors said.

“The victim did not consent to any of these acts and reported that she was unable to move or speak and felt ‘frozen’ and ‘paralyzed,'” prosecutors said.

When questioned by police as to whether he had sex with Constand, Cosby, according to the charging documents, answered, “never asleep or awake.” The statement appeared to be at odds with Cosby’s sworn deposition in the civil case that they had consensual sexual contact.

Steele said the case was brought after new information came to light this year, adding that the victim was willing to cooperate.

Constand declined to speak to reporters gathered outside her home in Toronto. Her lawyer, Dolores Troiani, issued a statement thanking the district attorney’s office, adding, “In that this matter is now being pursued in the criminal justice system, we will not comment further.”

“In Pennsylvania, there is now a journey to justice,” Gloria Allred, a lawyer who has represented 29 of Cosby’s accusers, said at a news conference in Los Angeles. She said many of her clients, some of whom have brought civil actions of their own against Cosby, would be willing to testify against him if the criminal case reaches trial.

“Probably it is going to be the highest-profile criminal case in this country, at least involving a celebrity,” she said.

The mounting accusations have shocked Cosby’s fans and crushed his wholesome, family-man image as various television projects and live shows were canceled during the past year. He also stepped down from the board of trustees at Temple, and there were calls to revoke his Presidential Medal of Freedom.

Several women who alleged wrongdoing that can no longer be brought to trial due to statutes of limitation have sued Cosby instead for defamation, claiming they were smeared by his assertions that their accusations were fabricated.

One woman, Judy Huth, has sued on the basis of repressed psychological injuries she claimed to have suffered from an alleged sexual assault in 1974 at the Playboy Mansion in Los Angeles when she was 15.

‘EVASIVE AND CONFLICTING’
A portion of a sworn deposition by Cosby in 2005-2006 in the civil suit brought by Constand was made public earlier this year. In it, Cosby acknowledged under questioning that he had obtained Quaaludes, a sedative that was a popular recreational drug in the 1970s, intending to give them to young women in order to have sex with them.

About his encounter with Constand, Cosby said under oath that it was consensual and that he gave her some Benadryl, an anti-allergy medication, to relax her.

At one point in his deposition, Cosby said he recalled thinking, “Tell your mother about the orgasm. Tell your mother how we talked,” as he worried about what her mother might think.

Prosecutors in court documents cited Cosby’s “evasive and conflicting identifications of the drug he gave the victim” as a key factor in their decision to charge him.

Constand, who has sought in court to unseal the record of her civil case and settlement with Cosby, said in legal documents filed in July that she is a lesbian, despite his sworn assertions that their encounter was consensual and that he was adept at picking up on women’s cues.

“I think that I’m a pretty decent reader of people and their emotions in these romantic sexual things, whatever you want to call them,” he said in the excerpt, published by The New York Times.

Cosby has stressed through his attorneys and in court filings that the deposition excerpts contained no testimony that he engaged in any non-consensual sex or gave Quaaludes to anyone without their knowledge or consent.

Earlier this month, Cosby sued seven of his accusers, saying the women who said they were assaulted were lying and had defamed his “honorable legacy and reputation.”

The actor is best known for playing Dr. Cliff Huxtable, the family patriarch in the TV sitcom “The Cosby Show,” one of the country’s highest-rated television shows in the 1980s.