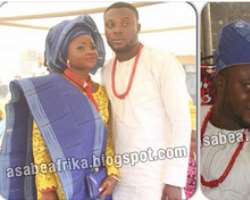 Late Nigeria's indigenous, Oladapo Olaonipekun better known as Dagrin, will be smiling wherever he is now as his younger sister picked a man of her choice to settle with as her husband.

The two love birds have been dating for a while and decided to take their love higher as they had their traditional marriage and engagement on the 13th of December, 2015, in Lagos.