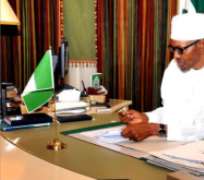 Dear President Buhari,
We are in dangerous times, and your actions, or inactions, will count for a lot. The truth is that whenever someone begins a project, especially a project which he has fought so hard for, it is important to make haste, lest motivation wanes. If motivation wanes, there is a clear and present danger of the entire project faltering. That, is the cliff down which we all stare at the moment, including you, no, especially you.

The wind in the sails which swept you to office just over half a year ago are beginning to dissipate, and no other scenario illustrates this better than what is happening in the North East at the moment. I’d rather not, at this point, dwell on the fact that the buck stops at your table, and for my own, selfish reasons.

I voted you, and at this point, I don’t want to accept that I may have made a mistake. In voting you, I had hoped that if anything, I’d be looking at an end to the Boko Haram nonsense post haste. That has not happened. Rather, I’ve been told about a “technical defeat”. What does that mean?

Sir, a week before we all queued up and voted you into office, I stood before a room full of your supporters, an audience which included some of the “big men” in your government today, and I told them that no matter what, they should not lie to you. I took that stand, because I believed, and still believe, that the reason the government of your predecessor failed was because of that kind of dishonesty. Sadly Sir, it appears that my advice was not heeded.

You are the President of Nigeria. Your success will be beneficial to me, and to millions of my fellow citizens. Likewise, your failure, will negatively impact me, and millions of my fellow citizens. Telling you the real situation at every point in time will lead you to success. Hiding things from you, will lead to failure. It is my duty to you, and to my country, to tell you the facts always. I do not do blind support Sir, it is not in my blood, and will never be. I do not do blind opposition either. I say things, as I see them, regardless of how painful some of my peers may find such statements. It is both a weakness, and a strength. How you see it Sir, depends on your disposition, and I still like to believe Sir, that you of all people, see such truths as strengths.

Sir, your government is losing momentum, and a large part of it is, at least to my mind, because the people around you, those you have chosen to surround yourself with, are being dishonest with you. They have continued to tell you the same tales that you were told during the campaign, the same tales their predecessors told your predecessor. Rather than sit you down and have an honest discussion with you about the state of things, they are living in denial about the realities on the ground, from the price of oil, to the pump price of petrol, to the state of the economy, to Boko Haram. They are living in denial about the constitutionality of some of your actions, actions which are eroding your credibility as a man of integrity.

I’ll end this letter Sir, by asking a very simple question, a question who’s answer is meant for you, and you alone: All things being equal, in thirty years, you will be gone, I’ll still be here, how would you want me to describe you to my grandchildren?