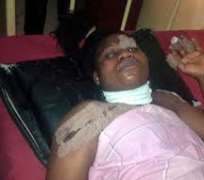 Mowo 11, a suburb of Olorunda Local Council Development Area of Badagry area in Lagos State, was on Tuesday thrown into pandemonium, as an Islamic cleric, Mallam Shehu, popularly referred to as Alhaji Sambo, attempted to use his 20-year-old lover, Busayo Amdalat, for money ritual.

The victim, who resides in Ibeju-Lekki, was said to have visited the cleric at Mowo Phase 2 in Badagry to spend the Christmas holidays.

It was gathered that in the early hours of yesterday, the cleric had a visitor known as Ifa and they asked the victim to put on a white cloth and when she did, the cleric and his accomplice hit Busayo with an iron rod on her head.

Rushed to hospital
Some residents, who saw her drenched in a pool of blood with injuries inflicted on her neck and other parts of her body, quickly rushed her to an undisclosed hospital in the area.

A resident, Taiwo Abdulraman, who spoke with Vanguard said, the residents quickly mobilized themselves into two groups; one of them went after the cleric and his friend, Ifa, while others took the lady to hospital.

“We quickly mobilised and went after him, when we got to his house, we saw blood in parts of the building. There were lots of charms and other fetish substances in his house. We saw the iron rod and the sharp knife he used on her, but we didn't meet him in the house. We also quickly mobilized and went to his second house at MTN Bus Stop, but he was nowhere to be found, he said.”

When Vanguard paid a visit to the hospital where the 20-year-old victim was being treated, her face and neck were covered with plaster.

The victim speaks
Narrating her ordeal, Miss Amadalat said “We both had a quarrel before now for close to three weeks. I knew his first wife before she died but the second wife did not want him (Sambo) to marry me but he resolved that he was going to marry me. I even got pregnant for him but he rejected the pregnancy at some point in time.

“I went to report him to a Muslim cleric but the cleric said there was nothing he could do to convince my lover to accept the pregnancy. For about two months, I did not call Sambo and because of the issue, I changed my telephone number.”

She said after Sambo apologized to her she forgave him.

Her words: “So, yesterday, Sambo and a man called Ifa were having a discussion in his house. Before I knew it, he started taking lots of alcohol, when I cautioned him; he refused to listen to me. He even offered me some but I rejected it.

“Later that night, he asked me to wrap myself in a white clothing of which I obliged. The man called Ifa wanted to use a cloth to cover my face and in the process, Sambo came in with an iron rod and hit me on the head. I shouted but nobody heard me because it was a bushy area.

“Ifa and Sambo attacked me with a knife but I managed to lock myself in a room. I now lied to them I had called one of the neighbours, it was in that process that they left and I managed to escape from the house.”