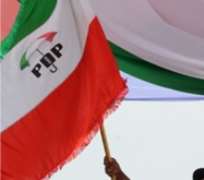 SAN FRANCISCO, December 29, (THEWILL) – The Peoples Democratic Party (PDP) has thrown more light into why the N6.08 trillion 2016 federal budget presented by President Muhammadu Buhari is what it called a huge fraud, warning that with the proposed N1.84 trillion borrowing, the nation is going the way of Greece.

Speaking with journalists Tuesday in Abuja, the National Publicity Secretary of the PDP, Olisa Metuh, explained that a breakdown of the N1.84 trillion shows that Nigeria would be borrowing N5 billion a day for the next 365 days, starting from January I, 2016, without corresponding provision for economic production and a clear repayment plan, a scenario that spells doom for the future of the nation.

According to Metuh, “Some people may be wondering why we raised an alarm about the budget. The reason is simple. When we analysed the budget, we discovered it is a misshapen attempt at a Keynesian economics of applying deficit spending to stimulate growth even when studies have proven that GDP growth rates decrease by over 50 per cent when debt goes from low or moderate to high. But then we know the borrowing here is to pay huge campaign debt and fund a political war chest.

“By every standard, this budget is a booby trap against the nation. When you break down the proposed N1.84 trillion borrowing, you discover that it amounts to borrowing N5 billion everyday for the 365 days in 2016. The questions are: for what specific projects are they borrowing N5 billion per day and how do they intend to pay back?

“The President should explain to Nigerians how they intend to pay back the loan. Is it by continuous borrowing to service the interests, and does he intend to accumulate colossal debt for future generations of

Nigerians?
“The truth is that this administration cannot justify this proposal. There is no known economy in the world where you can justify borrowing N1.84 trillion without specific projects and precise repayment outline.

“This is worse still in an oil-driven, mono-economy at a time crude oil is selling at $30 dollars per barrel and is speculated to go down to about $20 dollars or even lower in the next one year. The idea can only come when you diversify the economy and boost production capacity in manufacturing and other critical sectors, a direction, which the budget clearly failed to provide.

“From all indicators, the borrowing will be negative. They are driving us to be like Greece, and to plunge us into unnecessary debt.”

“When the PDP took office in 1999, we achieved the cancellation of inherited debts. This administration, in seeking to accumulate debts, should know that there is no possibility that any country in the world will give us debt cancellation anymore.”

Metuh added, “More importantly, we are really worried about negative economic policies of the present administration and the copying of strategies that failed in other economies. Recall that we had earlier alerted on the negative consequences of the retrogressive foreign exchange controls wherein this government is making it impossible for honest Nigerians to engage in free trade and regulate their personal activities.

“There seems to be the erroneous belief that the controls will create foreign exchange stability or strengthen the Naira by limiting foreign currency outflows. This policy had badly affected other countries in the recent past; including Argentina, whose new government had to reverse the policy to save their economy. Why then are we copying a policy that failed in other countries?

“In practice, the kind of crude controls the Federal Government is implementing have been proven ineffective in preventing capital flight. By limiting the local availability of foreign exchange, the controls have instead increased the demand for foreign exchange, putting greater pressure on the Naira and achieving the exact opposite of what the government in its naivety believed would happen.

“The negative impacts of the ill-conceived controls include the hindering of international trade and discouraging of foreign investment.

“We have seen first-hand the crippling of the private sector in the last six months, upon the implementation of these measures were out. Traders, importers and all manner of businesses are being destroyed as a result of the contrived unavailability of foreign exchange.”

The PDP spokesman challenged the Federal Government to a public and open debate on the budget devoid of the sentiments of the APC-controlled National Assembly and who are minded against any cuts in their own allocation.