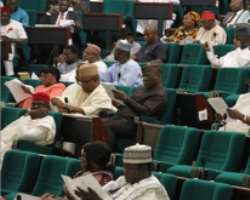 … Hold Investigative Hearing Next Month
SAN FRANCISCO, December 29, (THEWILL) – House of Representative Ad-hoc committee on Crude Oil Swap deals on Tuesday assured Nigerians of its commitment towards the recovery of multi-billion dollars looted in the implementation of the oil swap policy.

The Ad-hoc Committee also vowed to hand over officials of various agencies and marketers found culpable during the on-going investigation to relevant anti-graft agencies with the view to recover the ill-gotten funds with accrued interests.

The investigative public hearing was sequel to the allegations that the oil traders under-delivered petroleum products to the PPMC, the NNPC subsidiary responsible for taking delivery of the products after crude oil had been lifted by the traders.

According to the committee, “we’ve concluded all our investigative hearings on crude oil swap and the revelations are earth shaking, particularly, in the volumes of swaps and outrageous gaps in receipt of payments during this oil swap regime.”

While responding to inquiries on whether there is any pressure from the oil marketers, one of the lawmakers, who spoke under condition of anonymity, said: “Yes, of course, as some of the marketers are trying to use legal weapons to truncate a job we painstakingly investigated.

“We, members of the committee are resolute and for their threats, we’ll go the extra mile by ensuring that every kobo stolen must be returned with interests.

“We’ll not even stop at that, immediately we conclude the public hearing next month, those found wanting will be invited by all the anti-graft agencies to tell their stories.

“The pressure on us is enormous to bend the rule to favour those who think they are untouchable but we’ll surprise beyond their expectations as all the questions must be answered.”

The Adhoc committee was set up following a motion moved in June 2015, by Michael Enyong (PDP-Akwa Ibom), who alleged that the country had lost considerable revenue from the oil traders involved in the crude oil swaps and Offshore Shore Processing Agreements (OPAs).

The committee was mandated by the House to expose corruption, inefficiency and waste in the operations of the swap agreement, as a prelude to the efficient and transparent management of the nation's resources for improved revenue generation for the country.