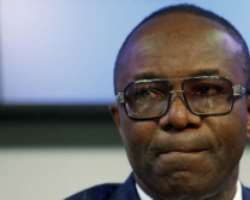 BEVERLY HILLS, December 29, (THEWILL) – Hopes have been raised over Nigeria's possible recovery from the dwindling oil revenue following an announcement by the Minister of State for Petroleum Resources, Dr. Ibe Kachikwu that the United States, U.S, has indicated interest in buying some crude oil from Nigeria.

Speaking with journalists at the Kaduna airport after inspecting the Kaduna Refinery and Petrochemical Company, KRPC, Kachikwu noted that the U.S is still importing oil to build up her reserves, adding that the country's sale of oil does not foreclose its tendency to buy crude at the same time.

Noting that the volume of oil that the U.S intends to buy is little and is meant for her internal consumption, he said the development was one of the fallouts of President Muhammadu Buhari's visit to the United States in July 2015.

He, however, did not disclose details of the development but said that the U.S had indicated its interest in buying “very limited” quantities of Nigeria's crude and that negotiation on that was ongoing.

The minister was however quick to point out that despite the renewed interest from the US, Nigeria was still diversifying its crude oil trading destinations deeper into Asia and other parts of the world.

“The fact of U.S actually being back into the sales of crude market obviously will impact on prices but what you find is that the volume of export that U.S intends to do is really minimal because there is a lot of local internal consumption and strategically they are still reaching out to buy a couple of Saudi barrels and in fact they are opening up to buy a couple of Nigerian barrels,” Kachikwu said.

He, however, pointed out that it would be technically wrong to say that the U.S had in the past stopped buying the Nigerian crude since three of the major oil producing companies in Nigeria are US-based and have up to 40 per cent share of Nigeria's production outputs.

His words, “They never really stopped because they take their own barrels of the share into their own refineries. What we are talking of is the NNPC’s portion of the crude which is about 60 or 55 per cent depending on the share of others. That is the element we are talking of whether they will continue to buy.

“Now when you take about one million barrels, out of that 445,000 is local intervention crude, so really what you are talking of is about 550,000 barrels. It's not a lot of product in terms of the NNPC portion.”

While revealing some of the strategies he hopes to deploy in co-locating refineries on the same sites with the existing ones in the country, he said, “What we are saying is simple, if you want to build a new refinery, it takes an average of two to five years and investment of between $2 billion and $2.5 billion.

“What we are encouraging people to do is to be able to unbundle certain refineries that are all over the world, which the owners have decided not to continue with for economic reasons, come over here and set them up and run them.”

Kachikwu assured that this would reduce cost as facilities, including premises, tank farm, pipeline and power source would be shared by the refineries.

“It automatically reduces your cost to around the $1 billion benchmark because power is a key element of that cost. So, it will be quicker and cheaper and your return on investment will be more,” he stated.