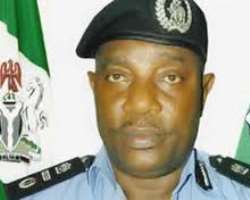 Popular socio-political crusader, Citizen Ikenna Samuelson Iwuoha has appealed to President Muhammadu Buhari and the Senate to without further delay confirm the appointment of Mr. Solomon Arase who is presently the Acting Inspector General of Police.

In a press release personally signed by the activist, who is also the Managing Director and Chairman of a fast growing Supermarket in Owerri –Imo State (NWACHINEMEREM STORES), Citizen Samuelson stated that the Acting Inspector General of Police had done well in the area of fighting crime, arresting criminal elements and investigating political criminals in the country, thereby improving the security situation within the last six months.

Dr. Samuelson Iwuoha said that the Acting Inspector General’s sincere and genuine commitment and determination to expose political criminals in the country has added value to President Buhari’s war against corruption and crime in the society.

Activist Samuelson who was once the Senior Special Assistant on Media and later Senior Special Assistant on Special Duties at the Imo State House of Assembly revealed that his petition to the Economic and Financial Crimes Commission EFCC dated 18th February 2014, which the immediate past chairman Ibrahim Lamorde deliberately refused to investigate after reportedly collecting bribe from the former Speaker of Imo State House of Assembly, Rt. Hon. Benjamin Uwajumogu, is now receiving serious attention at the Force Headquarters. Citizen Samuelson described the Ex-EFCC Chairman as a criminal who connived with a fellow criminal in the person of the Rt. Hon. Uwajumogu to sweep his petition (which exposed the criminal activities of the former speaker) under the carpet.

“Solomon Arase few weeks ago ordered OR directed the Deputy Inspector General of Police in charge of FCID to investigate my two petitions, one on fraud and corruption, the other on political killings and conspiracy involving Uwajumogu and his cohorts. Senior Police Officers from Force CID stormed Owerri and I took them round, showing them properties acquired with stolen state funds by Uwajumogu. The officers also confirmed that Uwajumogu was involved in ghost workers racketeering. They confirmed that Uwajumogu’s aides were murdered at various times.

They have confirmed that Uwajumogu abandoned his legislative responsibilities as the then Speaker and rather was busy awarding and executing road contract scams across the state. They confirmed that the Imo State Police Command connived with the same Uwajumogu to perpetuate evil against me and my family after murdering one Architect Franklin Okoli. Uwajumogu is a murderer, a drug addict, a thief and a fraudster who looted the Imo State House of Assembly dry and blind. I am therefore convinced beyond all reasonable doubt that with the on-going investigations going on, the Acting Inspector General of Police has proved that he is on the same page with President Muhammadu Buhari in the fight against corruption and shameless criminals in this country. Conversely, the only way to encourage Mr. Solomon Arase is to urgently confirm his appointment as the Inspector General of Police”. Citizen Samuelson concluded.

The Eminent Activist Expressed confidence and hope that the former speaker would be prosecuted in the law court and finally jailed for the various crimes he committed against Imo State and Nigeria.

Indeed, he who sows injustice will reap calamity. If a man returns evil for good, evil will never depart from his house. Bread of deceit is sweet to the mouth, but afterwards the same mouth shall be filled with gravels and stones. The Bible is true.