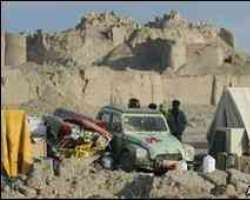 More than 25,000 people died in the Bam quake
Promiscuous women are responsible for earthquakes, a senior Iranian cleric has said.

Hojatoleslam Kazem Sedighi told worshippers in Tehran last Friday that they had to stick to strict codes of modesty to protect themselves.

“Many women who do not dress modestly lead young men astray and spread adultery in society which increases earthquakes,” he said.

Tens of thousands of people have died in Iran earthquakes in the last decade.

Mr Sedighi was delivering a sermon on the need for a “general repentance” by Iranians.

“What can we do to avoid being buried under the rubble? There is no other solution but to take refuge in religion and to adapt our lives to Islam's moral codes,” he said.

'Disappoint God'
Young Iranians sometimes push the boundaries of how they can dress, showing hair under their headscarves or wearing tight fitting clothes.

Mr Sedighi also referred to violence following last year's elections, which occurred when thousands of – mostly young – Iranians protested against the result, as a “political earthquake”.

“Now if a natural earthquake hits Tehran, no one will be able to confront such a calamity but God's power, only God's power. So lets not disappoint God.”

More than 25,000 people died when a powerful earthquake hit the ancient town of Bam in 2003.

Seismologists have warned that the Iranian capital Tehran is situated on a large number of tectonic fault lines and could be hit by a devastating quake soon.

President Mahmoud Ahmadinejad has said many of Tehran's 12 million inhabitants should relocate.

There are plans to build a purpose built new capital near Qom.