Dogara Condoles With Lamido Of Adamawa, Emefiele Over Their Mothers’ Death 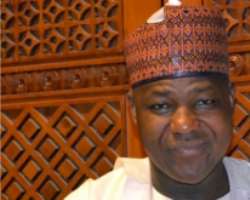 SAN FRANCISCO, December 27, (THEWILL) – The Speaker of the House of Representatives, Hon. Yakubu Dogara, has commiserated with His Royal Highness, the Lamido of Adamawa, Alhaji Barkindo Musdafa, over the death of his mother, Hajiya Sa'adatu Musdafa. Dogara also condoled with the Governor of the Central Bank of Nigeria, Mr. Godwin Emefiele, over the passing of his mother, Madam Alice Emefiele.

In a statement issued by his Special Adviser on Media and Public Affairs, Turaki Hassan, Dogara described the death of the two women as a big loss. He said they exited the scene at a time when the country and its leaders need their elderly and motherly guidance and wisdom.

The Speaker said Hajiya Sa’adatu and Madam Alice lived fulfilled lives as they lived to see their children attain positions of leadership in the country. He condoled with the immediate family of the late Hajiya Sa’adatu, the Adamawa Emirate Council and the people of Adamawa state.

The Speaker also prayed to God to give the families of the deceased the fortitude to bear the irreparable loss. The Lamido’s mother, Sa'adatu, 87, passed on after a brief illness and the deceased, popularly known as Adda, is survived by the Lamido, grandchildren and great grand-children.

Madam Alice Emefiele died at the Intensive Care Unit of St Nicholas Hospital, Lagos, also after a brief illness. Madam Emefiele, a devout Christian, is survived by seven children, including Mr. Godwin Emefiele, the CBN Governor. She was born in Agbor, in Ikah South Local Government Area of Delta State.