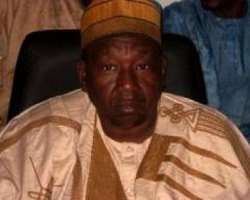 The Senior Special Assistant to President Muhammadu Buhari on Media and Publicity, Mallam Garba Shehu, has declared that the battle line has been sharply drawn between the governing All Progressives Congress, APC and the opposition Peoples Democratic Party, PDP.

Garba made this known in his article titled, ' #â€ŽBuharigate as the limit of obstructionist politics', excerpts of which he published on his verified Twitter handle, @GarShehu.

'As the war on corruption heightens, the political battle line between the governing All Progressives Congress, APC and the opposition Peoples Democratic Party, PDP has sharply been drawn'.

'This hashtag '#Buharigate' was intended as a counterpoise to 'Dasukigate,' the phenomenal corruption scheme by which money intended for weapons to fight terror was shared among PDP leaders. It was a fake intervention and a malicious propaganda against the president, obviously intended to detract from his enormously huge reputational capital, the basis on which the APC nation-wide victory was founded'.

'The #Buharigate failed to gain traction because it was seen as an opposition overreach and a desperate attempt to tarnish his hard-earned name and nothing more. No serious blogger therefore paid a serious attention to it'.

'This baseless allegation that the President had benefitted from the diversion of money intended to fight insurgency under the former National Security Adviser equally underlines the cruel nature of today's politics, that even the best personal examples cannot keep a leader from the tar brush of the opponent'.

'Apart from seeking to mellow the President, I suspect that the opposition had thought these attacks would revive the collapsed fortunes of the PDP while at the same time projecting their leaders as victims of persecution in the hands of the APC administration'