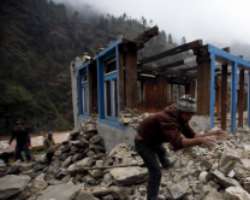 Eight months after a devastating earthquake hit Nepal, its government has finally opened the way for a reconstruction agency to spend $4.1 billion pledged by foreign donors to help the massive number of people rendered homeless.

Two separate earthquakes in April and May killed 9,000 people, injured more than 22,000 and damaged or destroyed nearly 900,000 houses, forcing many to live in shelters built with tarps and iron sheets, even in freezing temperatures.

It took until September for Nepal to create the National Reconstruction Agency (NRA).

On Saturday, a minister said that the cabinet on Friday named a chief for the agency, giving it the green light to begin its work.

The delays were due to wrangling between political parties, which frustrated many international donors.

Sherdhan Rai, minister for information and communication technology, said the NRA “will finalize the models for homes to be reconstructed and give financial assistance to people to rebuild their homes,”

He also said the agency “will be responsible to rebuild schools, hospitals, monuments, roads and office buildings in five years”.

UNICEF says more than 200,000 families affected by the tremors are still living in temporary shelters, at an altitude above 1,500 meters (4,920 feet) where harsh winter conditions will continue through February.

The earthquake prompted squabbling Nepalese politicians to united and in September adopt a new constitution, which they had failed at doing for seven years.

Aid agencies say the shortages disrupted efforts to send essential relief items such as blankets and clothing to earthquake survivors in mountainous areas.

“Clothes get wet with dew dropping from iron sheets at night and we cannot sleep,” Kanchhi Pahari, an earthquake victim told the Kantipur daily.

The government has handed only $150 for each of the affected families in emergency aid but is yet to provide the second, promised tranche of $2,000 for rebuilding homes.