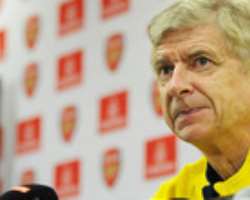 Arsenal manager, Arsene Wenger, says that his players must maintain the standards they set against Manchester City if they are to keep pace in the Premier League title race.

Monday's 2-1 victory over third-place City moved Wenger's side to within two points of leaders Leicester City and they can consolidate that position when they travel to face Southampton on Saturday.

The Frenchman claims the performance against Manuel Pellegrini's side confirmed the growing belief in his team after a season marred by inconsistency.

But he is well aware of the risk of failing to build on recent progress ahead of the fixture against a Southampton side struggling for form.

And he has challenged his players to match the levels they set in beating City and confirm their credentials as a team capable of sustaining their title challenge.

'It was an important win for us, but we already had a good confidence level,' Wenger said.

'To win these sorts of game, you need to believe you can do it. Overall what came out of the game was a strong team attitude and strong team effort.

'Everybody put hard work into the game. We got a positive result against a strong team who will fight for the championship, so it was an important night for us.

'I believe for us, the most important is to focus on ourselves. We have not to speculate too much on any weakness of Southampton.

'When you look at their team, they have the potential to be a very strong team. We have to convince ourselves that we again need another top-level performance.'

Mesut Ozil was again outstanding against City, providing two assists to take his season tally to 15, while Olivier Giroud also maintained his current form with his 12th goal in 14 appearances.

The form of those two players, together with the return to fitness of Theo Walcott, has strengthened belief that Arsenal can end their 12-year wait for the title, but Wenger knows that nothing can be taken for granted.

'We have had quite a positive year and stabilised our defensive record and improved our record against the strong teams in the Premier League, so it looks like we are on the right train going the right way,' he said.

'It's down to being pragmatic, putting the effort in to win your next game and worrying about your performance. That gives you a chance over a longer distance to maybe achieve your goals.

'At the moment, it's miles too early to say who will win the Premier League. We've played 17 games — we're not even at halfway.'

Southampton manager Ronald Koeman reacted angrily to his side's 2-0 home defeat by Tottenham Hotspur — their fifth in six games — which left the club in 12th place.

Koeman made it clear that he was unhappy with the performance of his players and centre-back Virgil Van Dijk admits that he must improve after his error cost his side a goal against Spurs.

'It's been a tough couple of weeks, but I think we need to stick together, get back to basics and start winning again,' the Dutchman told the club website.

'It's part of the game. Sometimes you make mistakes, but you have to move on and stay strong.'

He added: 'If you win one game it can turn around really quick. It's a beautiful game to play on Saturday.

'Hopefully we can get a good result and start playing our football again. Last game against Tottenham we played very well first half and we should have rewarded ourselves.

'We need to start with the same intensity because they are in a great place right now, they are doing very well, but I think at St Mary's everything is possible.' Agency report