Don’t Ask Me Why I Smoke…Ronke Odusanya 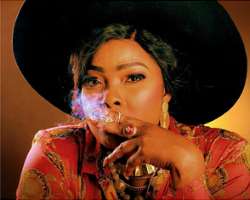 Nollywood actress, Ronke Odusanya, recently got thumps up from fans after she released some artistic stunning photos to pass a message across.

The actress while releasing the photos urged people to look deeply into it to see the artistic part of it before criticizing her.

In her words, “I call it 'switch.' Before you ask the question, make sure you understand the message. Look through the other pictures.”

It would be recalled that such scenario had once played out with singer, Cynthia Morgan, after she had released some pictures of her carrying a baby while smoking and that got many drawing up various conclusion without understanding from her perspective.