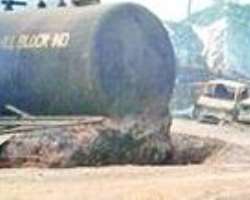 No fewer than 100 persons on Thursday died in the gas plant explosion in Nnewi, Nnewi Local Government Area of Anambra State.

According to residents of Nnewi, several buildings, over 60 vehicles and more than 50 motorcycles were burnt beyond recognition in the disaster, where more than 20 other people sustained injuries.

They said that the Christmas Eve fire, which emanated from Inter Corp Oil Limited (LPG Gas Plant), a member of Chikason Group, started at about 11am.

'It was caused by an explosion that occurred when a truck was making an attempt to discharge its contents without waiting for the mandatory cooling time while customers were said to be refilling at the same time,' an eyewitness, Emeka Odogwu, said.

He said customers, passersby and neighbours were burnt to ashes.

'Hundreds were trapped and there was no access for rescue workers following the heavy inferno while the fire service could not come to the rescue. of the victims'

Our correspondents gathered that apart from lives lost to the inferno, some dead victims were actually recovered in their homes.

The Chairman of Anambra State Red Cross, Prof. Peter Katchy, was at the scene and expressed worry over the existence of many filling stations in residential areas in the state.

'This is something the government has to urgently address. We have always known that this would cause a disaster and it has now happened,' he said.

While some residents of the area claimed that no fewer than over 100 persons were killed in the disaster, others said they were not sure of the casualty figure.

A source in the Government House, Awka, who spoke on condition of anonymity, said no fewer than 120 lives were lost to the fire disaster.

A source said, 'It's a pity. Thank God for saving my sister and her family from the incident. They live very close to the plant. As it is now, they have taken out up to 20 corpses along the road.'

According to an official of the Red Cross of Nigeria, who spoke on condition of anonymity, the fire started when a gas cylinder exploded in the area, killing about six persons on the spot.

The Commissioner of Police in the state, Hosea Karma, confirmed that six persons died in the fire.

When the state Governor, Willie Obiano, got to the scene of the inferno, he broke down in tears, regretting the incident happened during the festive period.

Obiano, while commiserating with the families of the over 100 people killed in the inferno, said his government would set up a panel to investigate the cause of the incident and find ways of averting future occurrence.

He pleaded with the people not to be discouraged as the celebration of Christ had been fixed before the unfortunate incident.

'You must maintain caution while driving by avoiding drinking and driving and other highway abuses in this festive period,' Obiano added.

Some, who claimed to have visited the factory after the fire subsided, said officials of the Red Cross and other agencies evacuated corpses from the factory as they battled the fire.

A resident, who did not want to be named, said, 'They have not yet entered inside the company.

'Many people were inside to buy gas because the company will not open tomorrow being Christmas. That was why the casualty figure was so high.

'The major road is blocked to avoid more casualties.'