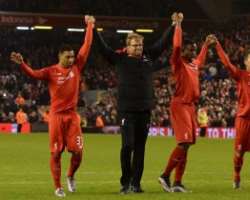 Liverpool manager Jurgen Klopp on Thursday expressed surprise over the mirth provoked by his decision to salute the club’s fans following the recent 2-2 draw with West Bromwich Albion .

Liverpool snatched a point in the December 13 game at Anfield when Divock Origi scored a 96th-minute equaliser and afterwards Klopp and his players joined hands to salute the fans sitting on the Kop for their support.

The gesture sparked derision on social media, particularly from supporters of Liverpool’s local rivals Everton , but Klopp said it was part of a strategy aimed at enhancing the connection between players and fans.

“It is really interesting for me as it is the first time in my life I have lived in a foreign country and I thought I knew a lot about England because I’ve been here a few times and I enjoyed it always,” he said.

“We look similar, but it seems in some ways we are really different. It was a decision in the moment. I never planned it and thought, ‘If we made a draw against West Brom, maybe we should.’

“I would like to be cooler, but I am pretty emotional. You can see it in my face sometimes.

“I like to be close with the fans, but it is not a thing from one side. I cannot say, ‘Come on, let’s do this together.’ We have to build it up. That is how it should be in football.

“For me it is always a common fight, always together.”

Klopp was speaking ahead of his side’s home game with leaders Leicester City on Saturday, when Liverpool will attempt to arrest a run of four games without victory in all competitions.

They will be without several senior players due to injury, with centre-back Martin Skrtel (hamstring) the latest victim, but goalkeeper Simon Mignolet and defender Dejan Lovren are due to return.