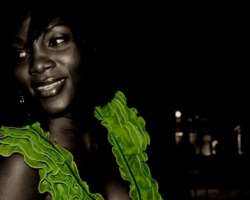 Nollywood superstar, Genevieve Nnaji, has seen it fit to respond to some of the recent outbursts of her colleague, Ini Edo. Genevieve set the ball rolling when she revealed that she felt insecure about her beauty and feared that one day she would grow old.

She stressed that it was one of the reasons why she had adopted a comprehensive beauty regimen, and that she hoped to keep wrinkles at bay for as long as she could. The revelation was picked up by rival Ini Edo, who said both Genevieve and Omotola were old and that try as they could, they would never be able to delay the onset of the inevitable wrinkles.

After the usual exchanges between the three leading ladies, Omotola also reinforced the fear of ageing when she was reported as planning to go abroad for plastic surgery to enhance the size of her breast. Ini Edo was on hand again to remind Omotola that breasts could not be inflated at will like car tyres and that there was a limit to what a woman could do to fight nature.

And now Genevieve is so tired of hearing Ini Edo run her mouth that she has sent her a word of advice. “Ini Edo just got married and she's already having problems with her husband because she's not around to cook his meals and keep him company. If Ini is good at advising people, she should start by advising herself. She should stop all the cross border talking about age and go home to cook for her husband. That is what is important”.

Marigold Madueke, a Nollywood reporter said Ini Edo has herself to blame. “I wish these Nollywood superstars would mind their own business for a change. Failing that, I wish they would talk about each other without getting involved in each other's family business but I guess that once the box is opened, anybody has the license to talk about anything. “If Ini Edo can cross lines and hit both Omotola and Genevieve with charges of being old ladies, then I guess Genevieve can also fight back and ask Ini to go and cook for her husband.

Maybe when Ini gets irritated by these statements, she would restrain herself too but we all know that it's not going to happen. So let me concentrate on the statement and say that when you have the job of being top actress, it is difficult to perform several domestic chores. Your schedule won't allow it so there's no way Ini is going to be able to do that.” Sarah Ofolabi of Film Essence disagrees: Ini only has herself to blame. That is why they say that if you live in a glass house, don't throw stones.

Clara Oduntun, editor of Cinema Today, said it is interesting that Genevieve should select Ini Edo's marriage as target. “It has been said in Nollywwod that with Omotola already married, Genevieve had wanted to marry before Ini Edo. Unfortunately, Ini got ahead of Genevieve so there's still some rivalry on the matter.“Genevieve had a daughter when she was 16 and she's been waiting for marriage to legitimize everything. Ini Edo got married, but as far as Genevieve is concerned, she is not putting her supreme effort into the relationship.

Thus, when Genevieve decides to jab Ini Edo, the latter's marriage would be ideal for target practice. At the same time, it is an acknowledgement that Ini has hit gold by getting married and that she had better start spending some valuable time with her family. The news editor of film Nigeria, Victoria Sandton said the three women are oblivious to what people think about their words and actions.“Their rivalry overwhelms them to such an extent that they fail to recognize boundaries and no one seem to know to when lines are crossed. Ini Edo will wade into Genevieve's private business easily as Genevieve wades into hers. And it is only a matter of time before Omotola follow suit.

The interesting thing is that as job opportunities continue to shrink in Nollywood, their rivalry continues to glow bright and that is probably because it is one of the magnets that make Nollywood what it is.

However, Genevieve has touched on a topic that is very dear to Ini and we are waiting for the strong emotion that will accompany Ini's response.”

Ini Edo “Both Genevieve and Omotola are old – that try as they could, they would never be able to delay the onset of the inevitable wrinkles”