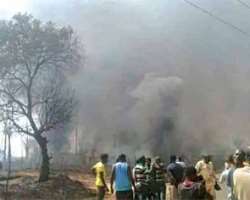 While Christians across the globe prepared to usher in Christmas Day, tragedy struck in the commercial city of Nnew to ensure that many families would celeberate the Yuletide mourning, no thanks a ravaging inferno that claimed lives  a gas plant in the town.

several persons are said to have lost their lives in the inferno but the exact number of casualties were not determined before press time. while The Guardian said that scores were killed, The Nation put the figure at six, while Vanguard reported four.

The police and the Nigerian Red Cross (NRC) also had different figures.

The Vice Chairman of the NRC in Anambra State, Prof. Peter Kathy, said four bodies were taken to the hospital. He said scores were injured.

According to him, four of the injured who had serious injuries were transferred to the Nnamdi Azikiwe University Teaching Hospital.

The police said the dead were customers, adding that no employee of the firm died.

But an  eye witness, Zico Prince who insited that no fewer than 20 died, said many customers were at the place at the time of the incident “because the company will not open tomorrow (today)”.

He said the Fire Service in Nnewi did not have water to fight the fire when it was contacted.

“They called Awka and Onitsha to rescue them,” Prince added.

Several accounts indicate that the fire incident started when a truck was trying to discharge its contents without waiting for the mandatory cooling time.

According to Vanguard report,  the tanker was discharging at a time when customers were said to be refilling their gas cylinders.The explosion occurred at the Inter orp Oil limited (LPG Gas Plant) a member of Chikason Group at about 11 am.

The newspaper’s source said all the customers who went to the gas plant to get a refill were allegedly burnt to ashes while some of the victims who were in the neighborhood and passers-by also got caught in the inferno. It was gathered that the rescue workers had difficulty in gaining access into the factory where majority of the victims were trapped.

The charred bodies of the victims and other badly affected burnt persons in the vicinity of the gas plant were taken to Nnamdi Azikwe University Teaching Hospital, NAUTH, Nnewi.

All efforts made to alert the Anambra state fire service of the fire incident did not succeed until damage had been done but a fire officer, Mrs Mary Ofia defended the fire service personnel in Nnewi when she claimed that the Nnewi fire truck was vandalized by angry mob when they went for an operation at Nkpor.

Apart from lives lost to the inferno, many buildings and over fifty vehicles around the gas plant were equally affected.

In his account, one of the survivors, Ikechukwu said: “My mother was preparing pepper we wanted to use to cook tomorrow after she returned from the market, the next thing we heard was the explosion that rocked the entire vicinity.

“I ran for my life and escaped with minor injury but my mother was not lucky. She was not as fast as myself and when the fire subsided a little bit, the next thing I saw was her dead body. Look at the chicken we planned to kill tomorrow for Christmas. A similar thing happened at another residence where a woman and her daughter were lucky to remain alive after suffering some degrees of burn”.

The Vice chairman of Anambra state Red Cross, Prof Peter Katchy who headed a team of Red Cross rescue operations, said that he was extremely worried about the presence of many filling stations in residential areas in the state.

He pointed out that the situation would have been worse if the affected gas plant was situated in thickly populated areas, pointing out that the Red Cross and the Anambra State Emergency Management Agency, SEMA would declare war on owners of filling stations sited at residential areas in the new year.