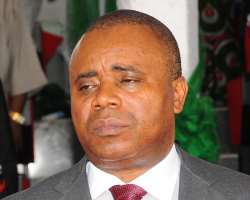 I read a post by one of my friends that the APC gubernatorial candidate in Akwa Ibom State, Umana Okon Umana is getting closer to his dream. I was wondering what kind of dreams he was alluding to. Then I realized that plasmodia are agents of nightmares contingent upon malaria they generate and hacked, fickle dreams; so are very common these days in Sub-Saharan Africa.

Less I forget, plasmodia are the mosquitos parasites responsible for malaria which trigger some sublime or mystified dreams can kill at any time.They could act like hallucinogens to make some people with vaulting ambitions like Umana to think they are bestowed with Napoleonic power.

Sometimes, according to medical experts, accumulated plasmodia in the blood system weaken one's bile duct to the extent that they render the liver ill-functional. At this stage, the sufferer could be plunged into a state of hysterical delirium forcing him to make false assumptions. If not medically checked this could lead to severe psychosis or Lewy body dementia.

Be that as it may, as for his dream of becoming a governor in Akwa Ibom State, at this material time, it's absolutely a wishful thinking for Umana Okon. However, it should be stated unequivocally that Akwa Ibom people have made a damning, yet an irrevocable choice of a governorship and that choice is Mr. Udom Emmanuel without beating the drums.

It's not out of place, therefore, for people to dream, it's not strange for people to claim governorship on Mark Zuckerberg's platform called Facebook. After all, MKO Abiola of blessed memory carried the Nigerian Coat of Arms on his head claiming to be president, albeit winning in a landslide victory, but it was all wishful thinking, yet regrettable.

The good people of Akwa Ibom are prepared more than ever before to keep, maintain, and uphold their the sanctity of their divine mandate at all costs. And by the end of the day, Umana will still get closer to his malaria dream, while Udom Emmanuel remains the governor for eight.