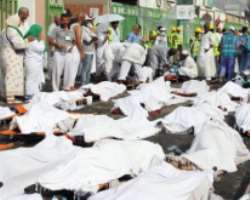 BEVERLY HILLS, December 24, (THEWILL) – The National Hajj Commission of Nigeria, NAHCON, yesterday put the death toll of Nigerians involved in the disasters which occurred during the year’s Hajj pilgrimage in Saudi Arabia at 280. A total of 75,081 Nigerian pilgrims participated in the 2015 Hajj exercise.

This year’s pilgrimage witnessed two major accidents one of which was the collapse of a crane at the Grand Mosque in Makkah on September 11, while on the 24th of same month a stampede occurred in Mina during the ritual of “stoning the devil”.

Chairman of NAHCON, Abdullahi Mohammed, who disclosed this while submitting a report on the 2015 Hajj pilgrimage, said: “Nigeria recorded a total of 280 deaths from both events, while 43 are considered missing as their status is yet to be ascertained.”

He pointed out that the report submitted contains observations and recommendations that will ensure more successes during future hajj exercises.

In his response, the Secretary to the Government of the Federation, SGF, Babachir Lawal commended the commission for the manner in which it handled the crisis.

A statement by Bolaji Adebiyi, a Deputy Director of Press in the office of the SGF quotes Lawal as saying he was particularly impressed with the conduct of Mohammed in providing the government and the public with adequate and “incontrovertible” information throughout the crisis.

He assured NAHCON that the report submitted will receive the prompt attention of the government.