How we collected N120 million from FG: NPAN 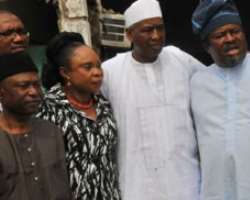 The Newspaper Proprietors' Association of Nigeria (NPAN) on Wednesday threw more light on what transpired by it and the Federal Government with regards to the compensation paid to its members for damages incurred due to harrasments by security agencies.

NPAN in a statement Deputy President, Mallam Kabiru Yusuf and General Secretary, Dame Comfort Obi, tried to explain its position on what it called misrepresentations in the public domain, of the compensation. It was addressed to newspapers' readers .

The explanation became necessary following insinuations about  the compensation paid to some media houses when their newspapers and circulation vans were impounded by security personnel between June 6 and 8, 2014.

The body explained that the money was to compensate for huge losses which the media houses suffered as a result of the seizure.

The statement reads, “The Newspaper Proprietors' Association of Nigeria (NPAN) at its expanded Executive Council meeting in Lagos on Thursday, December 17, 2015, examined the issue of compensation to its members whose newspapers were seized by security personnel in June last year.

“The association was concerned by the insinuations, posturing and uninformed commentary on the matter and wishes, out of respect to its readers and advertisers, to set the records straight. The facts are as follows:

lBetween Friday, June 6 and Sunday, June 8, 2014, some military and other security personnel impounded bundles of newspapers and circulation vans belonging to our members in Abuja, Oyo, Ondo, Edo, Ekiti, Delta, Niger, Kogi, Kano, Kaduna, Plateau, Benue, Imo, and Enugu states among others. In some of these locations, this illegal obstruction lasted five days.

lBy this unlawful seizure of newspapers, our members suffered huge losses in sales and advertising revenue and in business goodwill.

lMany of our members affected by this reckless assault considered resorting to the courts to seek redress.

lEven more alarming, the military authorities claimed that they had intelligence that newspaper vans were being used to ferry bomb making materials, an outrageous charge that seems to be a prelude to some sort of clampdown.

lAmidst this tension, and perhaps to stem the spate of multiple litigation against the security agencies and the Federal Government, the then President, Dr. Goodluck Jonathan, decided to hold a meeting with the executives of NPAN on June 12, 2014, at the State House, Marina, Lagos. At this meeting, the President apologised for the infraction of press freedom and the disruption of the business rhythm of our members.

lThis was well received by our members. In recognition of the President's gesture, one of our executive officers, Lady Maiden Ibru, spoke in favour of the association dropping the demand for compensation. But because some members wanted to seek redress in court, it was decided to pursue a civil resolution of the matter.

lThe Federal Government and the NPAN agreed to settle the matter out of court. In consequence of this, members were requested to submit a statement of their losses for consideration.

lAll active member newspapers submitted their claims, with some as low as a few hundred thousand Naira and others running into hundreds of millions.

lWith no easy way to verify these widely divergent claims, the association leadership accepted the offer from the government, of a flat rate of N10 million to each of the 12 media houses affected. The total amount came to N120 million.

lHaving suffered a lot of harassment during the military era, with some cases still winding their way through our courts, members agreed to a reasonable settlement over prolonged confrontation.

lMost of our members duly collected the compensation in good faith. The cheques for The Guardian, Tribune and Peoples Daily are still with our secretariat.

lMember newspapers that received money could not have any suspicion why it was paid from the office of the former National Security Adviser since the onslaught on newspapers was carried out by the security forces over which the office of the NSA, to some extent, superintended.

lIt is unfortunate that some people not in possession of the full facts, are seeking to link the NPAN with the alleged misdeeds of those who may have received huge sums of money from the office of the NSA unlawfully. Nothing can be further from the truth.

lOur association assures the general public that the fierce independence, diversity and forthrightness that have characterised the Nigerian Press remain unshaken.