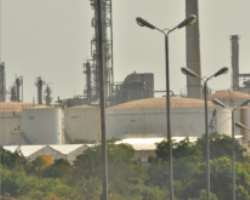 BEVERLY HILLS, December 23, (THEWILL) –With Nigerians still grappling with the problem of petrol scarcity, the general expectation that long queues at fuel stations across the country would soon ease-off has grown stronger, with the commencement Wednesday of petrol production by the Kaduna Refining and Petrochemical Company (KRPC) at the rate of 3.2 million litres daily.

A statement signed by Ohi Alege, group general manager, group public affairs division, Nigerian National Petroleum Corporation (NNPC), confirmed that the KRPC, which commenced production over the weekend with an initial PMS yield of about 1.5 million litres, had ramped up its daily yield to 3.2 million litres.

“The injection of this volume into the system will significantly impact ongoing special intervention efforts designed to bring relief to motorists across the country,” the Corporation stated.

Meanwhile, less than 48 hours after orders by Ibe Kachikwu, minister of state for petroleum resources, to NNPC staff to intensify their monitoring of fuel distribution and retail dealings at filling stations across the country, the initiative had started yielding positive results in Abuja and its environs.

The situation at most filling stations visited in Abuja remains calm and orderly as staff members of the Corporation were seen helping to fast track the process of dispensing fuel to motorists.