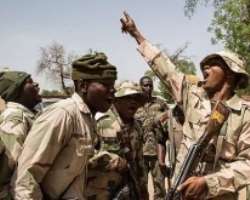 Mohammed said Wednesday at an interactive session with journalists in Lagos that the terrorist group had been degraded to the extent that it could no longer carry out any impressive attacks.

“From what I saw during my trip to the liberated areas of Borno State, which is the epicentre of the war, and the briefings I received from the chief of defence staff and the theatre commander, I can confidently say that our gallant military has largely met that deadline,” the minister said.

According to him, “I can say that the war against Boko Haram is largely won. I can confidently say this because just recently, I led a delegation to the hotbed of the insurgency – Maiduguri, Konduga, Kaure and Bama.

“Let me remind you that, until just four months ago, Bama was the headquarters of the self-declared Caliphate of Boko Haram. It was the war’s Ground Zero, from where the terrorists called the shots, collected taxes and dispensed jungle justice. The palace of the Emir of Bama, whom they sacked, was their operational headquarters.

“Also, Konduga was attacked several times by the insurgents who wanted to use it as a launching post to attack Maiduguri.

“Now, the entire 70 plus kilometre stretch from Maiduguri to Bama and all the way to Banki (which leads to Cameroon and the Central African Republic) are in the hands of our gallant troops. Our soldiers’ presence can be felt every few metres along the road that skirts the Sambisa Forest.

“At a point along that road, we were just about two kilometres to the Sambisa Forest, which is continuously being pounded by our dedicated and patriotic military.”

Concerning the terrorists still carrying out suicide bombings in some states in the North, he said: “Such is the nature of insurgency everywhere. Unlike a war between two armies, an insurgency never ends with an armistice. Even in countries like Colombia where insurgency was supposed to have ended decades ago, attacks still happen.”

He said “they have capitalised on the missing part of the war on terrorism: the civilian component. Our military has availed itself creditably. It is our turn, as civilians, to give them our unalloyed support, to realise that what they are fighting is not their war but our war, hence we must own the war.”

He therefore urged the Nigerian press not to be neutral in the fight against terrorism, saying journalists must be professional and patriotic at all times.

As the December 31 deadline approaches, he said Boko Haram and ISIS had launched propaganda, seeking to discredit the Nigerian military to give the impression that they (terrorists) were still holding sway.

“A report in that regard was widely published in some newspapers a few days ago. This is not true. Boko Haram is dispersed and largely defeated. The insurgents are hungry, they are sick and they are desperate and will clutch at any straw.

“Don’t let us prop them up with our reports. In the days ahead, they will release propaganda videos through their usual channels; we must not give this any play because it is nothing but a hoax,” he said.