Fashola gets N433.4bn for Power, Works and Housing 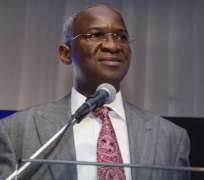 The Federal Government on Tuesday in Abuja earmarked N433.4 billion in the 2016 budget for its services in the Ministry of Power, Works and Housing led by Babatunde Fashola.

President Muhammadu Buhari stated this on Tuesday in his 2016 budget speech delivered at the Joint session of the National Assembly.

He said it was the intention of government to raise the percentage allocation for capital expenditure in future.

“To deliver our development objectives, we have increased the capital expenditure portion of the budget from N557 billion in the 2015 budget to N1.8 trillion in the 2016 budget.

“For the first time in many years, capital expenditure will represent 30 per cent of our total budget.

“In future years, we intend to raise the percentage allocation for capital expenditure,” he said.

Buhari said that the measure became necessary in fulfillment of the government’s promise to align expenditure to long-term objectives and government’s commitment to sustainable development.

According to him, this increased in capital expenditure commits significant resources to critical sectors such as Works, Power and Housing to the tune of N433.4 billion.

The President said these investments in infrastructure and security were meant to support the nation’s reforms in the Agriculture, Solid Minerals and other core job-creating sectors of the nation’s economy.

“We will invest to safeguard lives and property. We will invest in equipping our farmers with the right tools, technology and techniques.

“We will invest in empowering and enabling our miners to operate in a safe, secure and humane environment.

“We will invest in training our youths, through the revival of our technical and vocational institutions to ensure they are competent enough to seize the opportunities that will arise from this economic revival,” Buhari said.

NAN reports that the President presented a budget of N6.08 trillion for 2016 with a revenue projection of N3.86 trillion, resulting in a deficit of N2.22 trillion.