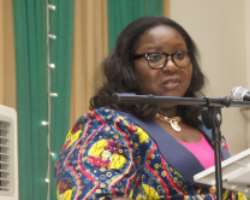 Semenitari spoke with newsmen on arrival at the Port Harcourt International Airport on Tuesday.

She said that President Buhari had charged the new appointees to clean-up the commission so as to be able to serve the people of the region effectively.

Semenitari, however, said that her appointment was a confirmation of President Buhari's commitment to active women participation in his government.

“My appointment is in keeping with President Buhari's commitment to ensure that the Niger Delta is properly positioned and adequately taken care off.”

“It is also in keeping with the President's commitment to guarantee women's participation in his government, but beyond that, it is a call to service.”

“I have insisted all through my life that the Niger Delta deserves better and this is a chance to prove that the region will be all that God plans it to be.”

She pledged to keep to the commitment of President Muhammadu Buhari to develop the region.

Semenitari described the high number of women who thronged the airport to receive her as ”overwhelming and women support for women”.

“I have always said that women lift women; my bosses all through my career, who have made me progress the most, have been women,” she said.