Zambia include Katongo and Chansa in CHAN squad 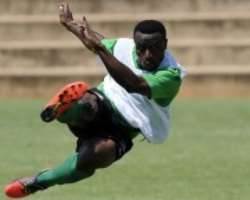 Zambia have drafted in 2012 Nations Cup winners Christopher Katongo and Isaac Chansa to their preliminary squad for the Africa Nations Championship (CHAN).

Katongo captained Zambia to their victory in 2012 but was then thrown out of the senior national team two years later after a row with the coaches.

The 33-year-old now plays Green Buffaloes in Zambia and so can play at CHAN, which is for locally-based players only.

While Chansa, 31, has returned from a spell in India to play for Zanaco.

Katongo, who was the 2012 BBC African Footballer of the Year, and Chansa have told the Football Association of Zambia that they are “humbled by the call up and confidence shown in their abilities and have promised to give their best.”

Zambia’s CHAN squad began its preparation in Lusaka today ahead of the tournament that kicks off on 16 January.

They will begin their Group D campaign on 19 January against neighbours Zimbabwe before playing Uganda and Mali, with the top two progressing to the quarter-finals.