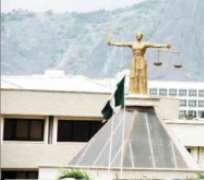 SAN FRANCISCO, December 22, (THEWILL) – The Court of Appeal in Abuja on Monday reserved judgment in an appeal filed by Gov. Darius Ishaku of Taraba against the nullification of his electoral victory by a tribunal.

Justice Abdul Aboki said the court would later announce the date for the judgment in the appeal.

The News Agency of Nigeria (NAN) recalls that the appeal by Ishaku followed the judgment of the Taraba Governorship Election Petition Tribunal on Nov. 7 and awarded victory to Mrs Aisha Alhassan of APC.

He said the petition was not accompanied by valid statements as the respondents claimed that it was the fault of the registry.

Agabi said the respondents claimed that the election was marred with corruption yet claimed victory in the election.

He said the respondents also pleaded that Ishaku was not sponsored by the party but later agreed that his sponsorship was not supported by any fact.

He complained that 51 witnesses of the appellant were not reviewed by the tribunal and urged their lordships to allow the appeal.

However, Mr Abiodun Owonikoko (SAN), Counsel to Alhassan, filed a cross appeal, saying INEC had no right to clear a candidate for election.

He urged the court to dismiss Ishaku's appeal and uphold the tribunal's judgment.