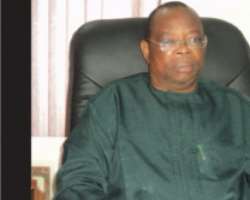 The Appeal Court sitting in Benin City, Edo State had in a suit number CA/B/EPT/337/15 dismissed the PDP Notice of Appeal requesting the court to dismiss the appeal of Chief Ovie Omo- Agege, the Labour Party's candidate on grounds not considered by the tribunal.

The Appeal Court had in its lead judgement on Saturday found Omo-Agege's appeal meritorious and consequently granted all the reliefs pleaded by him and the Labour Party.

But in his reaction on Monday, an embittered Amori said that the judgment which ousted him from office was a judicial somersault and miscarriage of justice since the same Appeal Court had on Monday December 14, 2015 earlier affirmed his victory by dismissing in its entirety the appeal brought against him by the APC candidate in the senatorial election.

According to him, the outcome of the Appeal Court case didn’t reflect the yearnings of the people of Delta Central Senatorial District who, he said, gave him their mandate to represent them in the Senate on Saturday, March 28 and Saturday April 25, 2015.

In a statement he personally signed, Amori stated that despite the antics and desperation of the opposition parties in the twice conducted senatorial election, the people of Delta Central with determination gave their votes to him as PDP candidate in the election because of their confidence in him to offer them the needed representation in the Senate for the advancement of the Urhobo nation.

“My victory in the twice conducted senatorial election was affirmed by the Election Petition Tribunal which sat in Asaba the capital city of Delta State in two separate judgments against the opposition parties, the All Progressives Congress, APC, and the Labour Party ,LP, in the tribunal.

“The Appeal Court sitting in Benin City, Edo State on Monday, December 14, 2015 further affirmed my victory by dismissing in its entirety the appeal brought against me by the APC candidate in the senatorial election.

“Regrettably however, same Appeal Court five days after reversed itself when it ruled in favour of the LP candidate in the election by upholding all the prayers in his petition. Without equivocation, I wish to state that the judgment of Saturday, 18th December, 2015 marked a twist in the political history of the Urhobo nation.

“What transpired at the court that day, in all sense of purpose, amounted to judicial rascality, judicial somersault and judicial award in favour of an obvious loser who came a distant second. Truly, the judgment is a miscarriage of justice,” Amori said.

According to him, “The judgment which was delivered in about two minutes and delayed for more than two hours, with six other cases pending for determination by same Appeal Court points to the Biblical inscription of the: Voice of Jacob but, the hands of Esau.

“The judge, who perhaps delivered the fastest judgment in the judicial history of Nigeria, had declined to read the judgment on the excuse that the other two members of the Appeal panel queried him why he alone delivered the previous judgment which went in my favour against the APC candidate.

“The same judge, two hours later, made a U-turn by delivering the judgment in the absence of the other two members of the panel in a scenario that appears as though he was acting on orders from 'Power from above'.

“The judgment , no doubt , is a major setback to our collective will to right some of the wrongs bedeviling the Urhobo nation and forge a common front in the determination to advance the socio-economic development of the Urhobo nation.

“It has once again denied the Urhobo nation the needed representation and leadership in the Senate at this crucial stage of our nationhood.

“I deeply appreciate the countless visits/phone calls and text messages from far and near in show of solidarity and condemnation against the Appeal Court ruling that has further put a taint in the nation's judiciary.

“As a law abiding citizen, I wish to sincerely appeal for calm particularly from Nigerians, Deltans and particularly my Urhobo brothers and sisters over the outcome of the Appeal court judgment.

“All hopes are not lost at all. Continue to have faith in me and together we shall overcome this temporary setback.”